Jac took his furthest trip yet when he headed out from Ohio to Massachusetts to visit the Equine Affaire (November 2013). He had been hauled shorter distances and was traveling with other horses which helped him stay relaxed. Some horses won’t drink much when traveling but Jac caught on well.

Jac spent most of his days in the Celebrity horse stalls where people could see him and take photos of him or with him. Jac also was brought out for appearances and was completely at ease there.

Although Jac had spent time at the Quarter Horse Congress preparing for his debut at the freestyle reining (see Episode 28) he had not been ridden in front of a crowd.

At 2:08 I chose do ground work during the introduction where it was likely that people would start clapping. 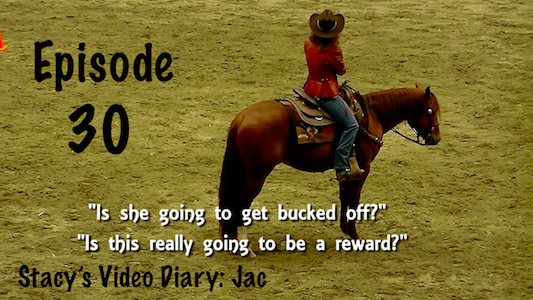 Watch the video below for the answer!

Choosing not to be mounted is a demonstration of prevention.

I also made a plan for how I would handle Jac’s reaction to the crowd clapping…if he had a reaction. Preparing myself ahead of time by thinking about what I will do helps me feel more secure. I chose to keep Jac mentally ‘busy’ and tell him what TO do. Many people wait until the horse has the reaction before they decide to do something; by then they are behind.

I was able to channel Jac’s reaction to the clapping. If Jac had not reacted, the whipping around him would have been the same as any other day at home. The exercise was familiar to Jac before this situation where it was needed. This is another example of prevention.

I did ride Jac and greatly enjoyed how the crowed responded to Jac’s first spins in public. The crowd wanted to clap for the demonstration…but was obviously concerned about Jac’s possible reaction. I said, “I know we are in a room full of horse people when the clapping starts like that. (The crowd is thinking) ‘Is she going to get bucked off? Is this really going to be a reward?”

Horse people are too funny! I love it!

After that the crowd felt comfortable clapping and Jac acted like he was a seasoned pro. Was all the prevention necessary or was Jac just destined to accept things like this? When prevention is used often times the answers are elusive because the problems are never encountered-which is the point.

If you have been watching Stacy’s Video Diary: Jac for very long you might have noticed that the footage hasn’t been ‘live’. Filming and editing is hard work! And if they had been ‘live’ we all would have experienced a two month delay while Jac was sore. We are, however, almost caught up to real time and you will notice in the next couple of weeks that we are releasing very close to real time (filming is still hard work and requires editing).

Jac and I will be at Equine Affaire in Columbus, Ohio April 10-13th (link to the schedule here). Stop by and visit one of the demonstration or the booth. Jac is in the Celebrity Horse Stall again too! Keep your eyes open when your driving…you might just see us driving down the road!