Regret or Rejoice? Mistakes that happen at horse shows…in the entry office.

Yesterday I showed Newt at the biggest show I have taken him to yet. Sometimes I struggle with Newt because he has very, very big shoes to fill. The struggle comes from having ridden and shown some very exceptional horses in my lifetime. Newt is a nice solid horse that is still maturing but there are parts of him that will never measure up to Vaquero (link) or Roxy. I can accept this fact but I still need coaching from my husband to remind me that when I show Newt I can only show to his ability.

This is a personal challenge for me because I like to show without holding anything back. When showing Newt I sometimes ‘forget’ that he isn’t able to show at the same level that I can. My challenge is to show Newt to the best level that HE is capable of.

Owning Newt adds another layer to the whole issue. Showing horses is a bit like gambling and I don’t tend to bet on myself. I tend to be frugal and save my money. Let me explain. 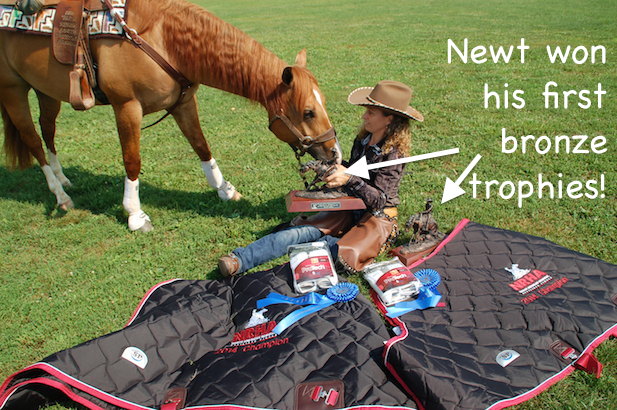 When I enter a class at a reining show I will show my horse once, one reining pattern, but very often that could count for multiple classes. For example if I am eligible for a class, there are likely several ‘levels’ inside of the class. If there are four ‘levels’ and I pay the entry fee in each level then my one run can count for four classes. Or I can enter one level, do the same single run, but I am only eligible to win in the level I entered.

It is a great system for the horses because if each level of each class were run individually it would be exhausting for the horses. Instead one run counts for multiple classes.

Yesterday when I was entering Newt, I chose to enter two out of the four classes. I chose this because entering classes isn’t free and I saved $90.00 by not entering the other two classes. The upper two classes that I didn’t enter were also tougher classes and I chose to save my money.

People were usually surprised to learn that I didn’t own Roxy…but there have been many times when I have said that it was a blessing in disguise. The blessings came in many ways but one was that the owner of the horse got to decide what classes to enter me in. This made it feel less like I was gambling on myself and more like the horse owner was making the choice.

I know this shouldn’t matter….but apparently it still does for me.

Yesterday when I showed Newt it turns out I was both right and wrong in my choices. I was correct that there would be better horses in the class. Shawn Flarida, who just won gold at WEG was there and he out scored me and won one of the classes I didn’t enter. I would have been second…which would have been awesome.

I was also wrong because my score would have won the other class that I didn’t enter. A summary would be:

So the question is: Regret or Rejoice? I know which I chose but which would you choose?