Order of training theory; thank you for your response to the Jac series!

Having said that, I am doing my best to keep up with you.

Thank you to each and every one of you who has watched the Jac Diary and to all of you who have left comments on the blog or on Facebook. It is really me who is ‘liking’ them and responding to them! I also read all the comments on the blog personally. I cannot promise I will aways keep up. I do have a husband, three sons, a barn full of horses, and laundry to do! But I will do my best.

Here is a question that came through the blog comments;

Stacy, I have a question. Why didn’t you opt to desensitize Jac to the stick and string prior to your first 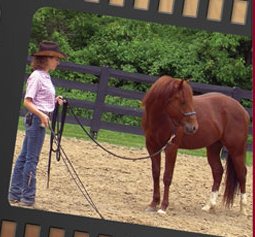 session with it (I think episode 3)? I’m just wondering because in the past, I have seen many folks get the horse used to the lunge whip, carrot stick, or what have you touching them and flipping around them before they begin to teach the horse to lunge. I’m always curious to learn new tools and techniques and your method spiked my curiosity:) Thank you!

I was basically doing a combo. If you watch around 7:40 I explain how I was ‘desensitizing’ and it turned into lunging. A combo of what you were asking.

Episode 1; I was watching him. Episode 2; I carried the stick n string as an extension of my body. Episode 3; was both ‘desensitizing’ and ‘sensitizing’, if we want to use those words.

Before began desensitizing I was making sure I could keep him away from me. Making sure he respected my space and would move away….away being the key word because that would keep us both safe. Notice how far away I stay from him….and require him to stay away from me. We both need to ‘earn’ the right to be in each others space.

I would have had serious trouble directly approaching ‘desensitizing’ without somehow moving his feet first because he was so green. Also, because he showed signs of confidence (1:22) bordering on aggression I needed to know he respected me.

So in short I;

Having said all that, you are correct in saying there are many options.

I could have set up a round pen, controlled his direction and movement, taught him to turn and face me, and then stand for the desensitizing. Pretty traditional but essentially it is;

I also could have stood in the door way of the stall, moved him around by reaching in with a lunge whip, released pressure when he stood in a certain position, discouraged sticking his butt in my direction, and eventually been able to rub him all over with the whip. Essentially it would have been:

I always try to look for the ‘big picture’ and then approach each horse and situation as an individual. The variety is what I enjoy…correction….LOVE about training horses.

Check out this video to see a ‘less traditional’ application of training. I opted for this method, which I made up on the spot, because my friend had just bought a BIG filly that was unhalter broke and I didn’t want to work her as hard as traditional round penning would have required. So I applied the round pen ‘theory’ for use in a stall.