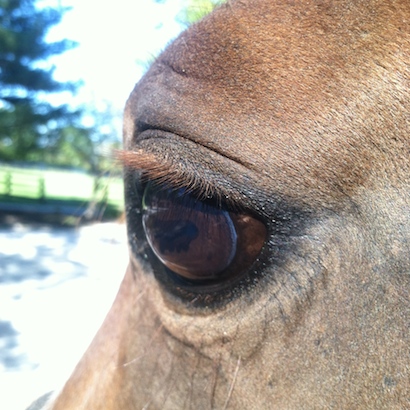 Last summer while at a horse show a friend noticed her horses eye was tearing and slightly swollen. It appeared that he had either bumped himself or gotten something in his eye such as hay or sawdust. Several of us looked at the horse, who was otherwise comfortable, and agreed it didn’t appear to be out of the ordinary. The horse quickly recovered and the incident was almost forgotten, until two months later. This time it was the other eye. Again, only slightly but this time a vet was called because the horse didn’t have a history of being clumsy and it seemed a little odd that this was happening again.

The vet throughly examined the eye for any scratched or other physical causes but upon finding none explained that it could be uveitis. He left instructions for treatment, including ointments and an anti inflammatory, and also gave an assignment; document everything you notice. Part of the diagnosis process is the reoccurring part. If it didn’t reoccur then even the second flare up would be written off as an undiagnosed irritation of the eye. Unfortunately it did happen again. The vet was again called and the horse is now scheduled for a trip to a vet who specializes in treating equine recurrent uveitis.

I have found articles on moon blindness that outline how long the disease has been around (4,500 years, it is one of the earliest documented issues in horses) as well as past and current theories on the causes including; heredity, damp stables, bad feed, and marshy pastures, worms, bacteria, diet, viral infections, injury and stress.

When issues like this happen to a horse you know well it becomes even more personal because it is easier to rule out many of the possible causes. There is no  family history, the diet has been checked by analysis, the horse is regularly dewormed and seen by vets, there has been no major trauma and the flare ups have no consistency. The first one happened at a show but another happened during the down time of winter. Everything has been documented but now she must wait for the final verdict from the specialist.

Have you ever dealt with uveitis in horses? What were the symptoms, the treatments, and the outcome?