Lunging to make a horse tired vs trained; Roxy’s huge complement to Stacy

Stacy, “I’m hoping you can explain your use of lunging. I’m no pro (not even close!), but I have seen that Parelli and Monty Roberts and a few others usually do the ‘free lunging’ style or use other ‘games’ to work with their horses. I was always told those options ‘engage’ the horse more and require him to be more of a ‘partner’ rather than just go in circles around you. Jac obviously doesn’t seem to be ‘mindless’ during your training sessions so I’m curious: how are you engaging his brain while physically he just goes around you in circles? Thanks for all the videos : ) I’m learning a ton!”

Margaret-I did some ‘free lunging’ in “Stacy’s Video Diary: Jac- Episode 14”. The lunging that most people speak against is done just to wear the horse out. Some people lunge with the goal of making the horse physically tired NOT with the goal of engaging their brain. Lunging to make them physically tired, just loping them in circles, can and is done both on line and off. The rope or lack of rope doesn’t determine the goal- the human does.

When I was in college students had the opportunity to go to the Quarter Horse Congress to work hands on with trainers. Many of my friends and myself were hired to lunge horses only for the purpose of making them tired. Not something I am proud of. You can still see it being done if you visit the show.

Engaging the brain doesn’t necessarily mean that the horse must be ‘free lunged’ or loose it just means that I am conversing with the horse the whole time. This is possible both on and off the line if done correctly.

Many years later I showed Roxy at the Congress and Roxy gave me one of the biggest complements I have ever received. I took her in and showed her in a reining class on a ‘full drape’ which means the reins were very, very loose. She ran fast, stopped hard and we placed in the class. The huge complement that Roxy gave me came when I was leading her back to the stall. A big gust of wind came through and she started bucking and kicking up her heels, without pulling on the rope. It only lasted a few seconds but what she was telling me was that she was fresh and feeling good; AFTER I SHOWED. Which meant she hadn’t been exhausted to reach the goal, just well trained and willing when she could have easily chosen to act up.

While it often looks like Jac is ‘just going in circles’ I try to verbally explain that more is happening than meets the eye. Jac may look away, drop in, try to stop, etc. and I deal with each as it comes. It is often easier to teach people to see these things through the use of objects or ‘games’ because the goals and visuals become more clear; even though engagement is possible in many other ways. 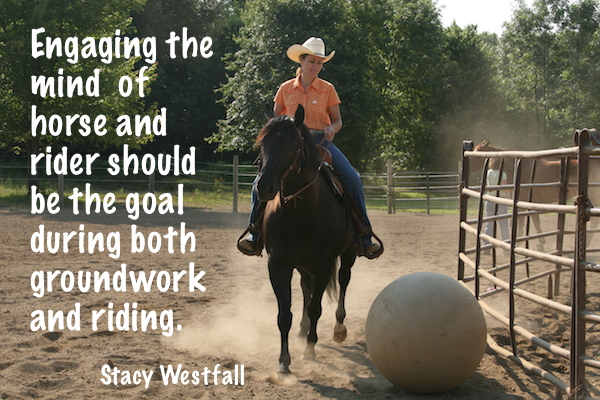