I learned it from a horse….really!!!

When I was younger and had much less experience it often confused me when people claimed to have ‘learned it from the horse.’ To me it sounded like they didn’t want to try to explain what they knew or something. So over the years, as I finally figured out that it is true-great horseman do learn from horses-I have tried to remember my early frustrations with the phrase.

Here is my latest example provided by Scrapper and Popcorn. 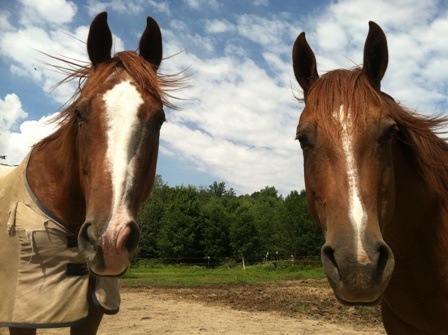 Most of you know Popcorn from The Road to the Horse, but Scrapper is less well know. That is because he is twenty years old! I owned a pony as a kid and then one Quarter Horse. I bred that mare once in highschool and she had one foal=Scrapper.

Now Scrapper is ‘unique’. To start off his mother rejected him and refused to nurse him. Mom and I didn’t really know what to do and the vet couldn’t come for hours. He (the vet) did tell us to milk her and bottle feed Scrapper. Mom quickly called a dairy farm and rigged up a nipple and a Mountain Dew bottle to bottle feed him. No wonder he is ‘special’!!! He really thought he was a human for half of the first day of his life.

One of the interesting side effects is that Scrapper isn’t the brightest bulb in the room. Maybe he would have been like that anyway. He is as sweet as a horse can get- only he thinks he is a human or at best a small dog. But at 16 hands he is neither. But back to the main story….

Popcorn gets along with everyone in the pasture. He is always the boss but he is incredibly fair. So imagine my surprise when I put these two together and Popcorn ATTACKED poor Scrapper! After rescuing the poor guy I gave it some thought and then went back to the pasture. This time I decided to watch closer.

Watching the second time was harder than it would have been the first time because horse language gets subtle REALLY quick, especially with as hard as Popcorn had bitten Scrapper. But there it was….if only I read the body language.

See, Scrapper, can’t stand flies. And he has been turned out with our yearlings. And when flies land on Scrapper he runs and body slams INTO the nearst horse in the pasture in a blind frenzy attempting to remove the fly. He about knocks the other horses over….until Popcorn.

I figured it out as Scrapper ran toward Popcorn preparing for his full body blow. Popcorn didn’t move, didnt even look up, but Scrapper suddenly swerved and changed his mind. As I watched longer the same scene was repeated, occasionally Popcorn would correct Scrapper by chasing him away if he invaded his space too much.

And all of this was fine. Interesting stuff…but….

The real discovery came a week later when I pulled Popcorn out to ride. Scrapper has been mostly turned out for the last ten years and gets terribly attached/lonely when left alone. Leaving the pasture with Popcorn I even said, “Don’t run yourself silly you old guy.” I knew that was what was coming.

And that is when I learned something from the horse.

Popcorn had taught Scrapper to control his emotions. “Yes, the fly is bad—but don’t slam into me. Control your emotions and make a different decision.” And after a week of this ‘training’ Scrapper (remember he isn’t the brightest) was even applying this to being left alone! I love learning from my horses! 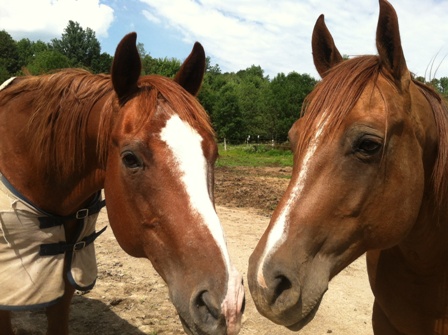