How long did you ride while you were pregnant?

“Stacy, I know you have 3 boys, and I was just wondering how long you rode while you were pregnant. Did you compete, or was it more riding for pleasure?Thanks, and I look forward to hearing your response!”-Sharli

“Stacy, Just wondering what ideas you might have for a pregnant gal to keep her horse in shape for next year. I’m 5 months along now and my husband has asked that I stay safe and do not canter or trot my horse. We do mostly gaming. If you have any ideas I would appreciate it. Thank you!”-Crystal N.

I do have three sons and I received differing advice during my pregnancies from professionals. My first advice would be to follow your doctors orders. For fun I will also recap some of what I did. 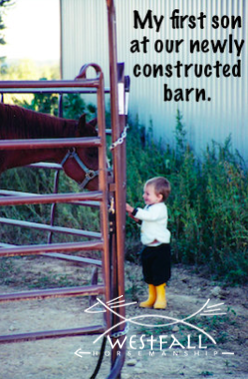 I became pregnant with my first son in the fall. I was newly married and I had a job as a bank teller. I had recently sold my only horse (with a promise to buy him back someday) and Jesse and I hadn’t started our training business yet. This made it easy for me to not ride. The temptation of riding a horse I knew wasn’t there and I wasn’t interested in experimenting with other horses. Over that winter Jesse started riding a few horses for people and I grew restless without horses to work. I cleaned stalls, brushed horses and watched Jesse ride. That spring I trained a filly for the yearling lounge line class. I have a win photo from a show shortly after my son was born…but it is buried in my storage unit in Ohio. My Doctor recommended that I wait to ride for 6-8 weeks after my son was born so I did.

When I became pregnant with my second son we were training horses and I was staying home with my first son. I rode, with permission, quite awhile into my pregnancy. I tended to lose weight for the first three months and then it took a month or two to gain back to my original weight. It didn’t seem like a big deal to ride because all of the horses were broke (no colt starting) and it didn’t seem uncomfortable…until around 5-6 months. At that point I noticed several things. First, my balance was affected. Not huge, but it was there. Second, I could feel the supporting muscles in my stomach being stressed-especially at a lope. At the time the doctor and I were both operating under the idea that ‘if I was in shape for it, it probably would be safe’. The thinking was very similar to the runner, Alysia Montano, in California who competed while 8.5 months pregnant. 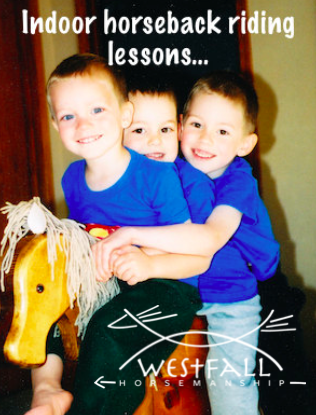 I was due January 1st and when the Congress entries had to be mailed in August 20th I thought it was a good idea to sign up for the Ladies Reining. Keep in mind that shortly after this is when I started to notice the symptoms above. By September Jesse was riding the horse for me most of the time and I would get on occasionally. I did show at the Congress in October and my son was born December 22. I have a photo sliding and placing at the Congress while very pregnant. It is buried somewhere in my storage unit in Ohio…but maybe it should stay there, if I remember correctly it was taken after midnight and we all look worn out, lol.

The third time was a bit more interesting because of one woman I met. My third pregnancy started out like the rest and I rode. People didn’t even know I was pregnant for quite awhile and I continued riding aged horses and showing. One day I was at a small local show and a lady walked up and introduced herself to me. She told me she was a nurse and she worked with my sister-in-law. We visited for a few minutes and then she mentioned that she had heard I was pregnant. I confirmed this and then she said, “I know it isn’t any of my business but I feel the need to tell you something. I am a nurse. I specifically work with newborns. You are an expert in the horse world and I respect that. I also would guess that, as a professional, you have seen more than most when it comes to bad things that can happen.”

“I am asking you to consider not riding. I know it feels safe because you know the horses but think of the risk. I work everyday with children who are born premature, who are injured before they are even born. I see the problems and the pain it causes their families. If they could go back and change things they would. What if your horse trips? Just a simple trip could cost your babies life.” 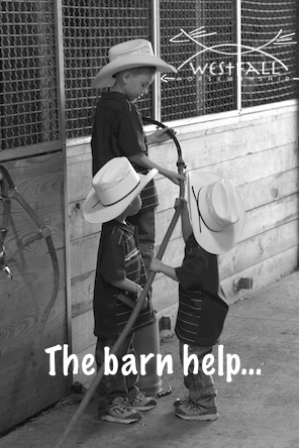 As you can tell, she was very convincing. I had seen a horse trip and go down in a smooth arena, on a loose rein, for no reason and the rider suffered from a dislocated shoulder. Accidents do happen and as soon as she gave me her perspective I couldn’t erase it from my mind. I went home and didn’t ride for the remainder of that pregnancy. I still cleaned stalls and spent time in the barn. I am aware that accidents can still happen on the ground or driving in a car, but I also had two small children and when I looked at them I knew I wanted to do all I could to reduce any chance of hurting the baby I was carrying.

I believe that if I had met this lady during my first pregnancy I would never have ridden during any of them.

I wouldn’t feel bad turning my horse out during my pregnancy and accepting the idea that we could both get fit together after my baby was born. I can imagine doing groundwork once the doctor has cleared you for lifting weight, etc after the baby was born and then, when cleared by the doctor, I could see my horse getting fit along with me. Horses that are turned out will stay in shape pretty well. Another option would be to lease the horse to a friend or someone you trust. The options are almost limitless when doing this-you could choose to keep the horse at your house, you could give lessons, you could allow the horse to go to someone’s barn that you trust-the list goes on and on.

Congratulations. Enjoy this time. I loved being pregnant. Keep safe and remember there will be plenty of time for riding in the future. Getting back on after some time off is a little bit like a Christmas present to yourself.