Have you known of any horses fracturing their pelvis?

“Hi Stacy just curious as to your thoughts on this…. I traded a nice Gucci mare for her 1st foal which was born may 2013…I would visit her every week and at the 4 week old mark I noticed her right hind was hurt..she would walk on it but hold it up at the trot & canter…I told the barn owner and had to keep asking and he finally had a vet out…vet palpatated her and she was sore and had a slight temp so she thought growth plate infection and prescribed antibiotics & stall rest. I continued my weekly visits and kept asking barn owner how she was doing and when would she be off stall rest (I had no vet report to go by) he said she’s about 85% that the vet was out again which later on I found out was a lie 🙁 my filly’s name is Paris and they weaned her at 4.5 months and I immediately picked her up. I had my vet Dr. J come look her over to check for worms & physical exam. He noticed her right knee with a bump and watched her go and wanted to xray it…he did….2 knee fractures!!!! So he consulted a surgeon and no surgery was required just stall rest…. That ended up being 16 weeks after several xray checks on the healing progress. I told Dr. J about the back leg as it was still weird but due to the knee it got pushed aside as we though it wasn’t anything to worry about. Well after all this time & money the knee healed fine but the hind end was still funky…I had exam & chiro done a few times with no results. Finally I had an opportunity to take her to the equine hospital and she had stifle X-rays which were clean then we did hip X-rays and results were she fractured her pelvis at around 1-2 months of age! The surgeon could tell by the break & healing it’s done the approx time frame. I had Paris boarding at a facility and decided to take her home to lay her to rest. Vet said she may be pasture sound but said most cases as they get bigger & heavier they become painful and often get put down 🙁 have u known any horses fracturing their pelvis? Does the barn owner have any responsiblity to help with the expenses I’ve endured since picking her up? This is so sad” 🙁 -SRW

This is a very sad story. I know many breeders and although the majority of times things go well, I have seen many odd ball cases over the years.

I know of one other foal, at about the same age as yours, that came in from the pasture one night lame. The owner called the vet when he noticed the foal was lame…and that foal also had a broken pelvis. The vet recommended euthanasia and the shocked owner agreed. There were no outward marks on the foal, no evidence (mud, scrapes, etc) showing any impact or fall. How the injury happened remains a mystery. 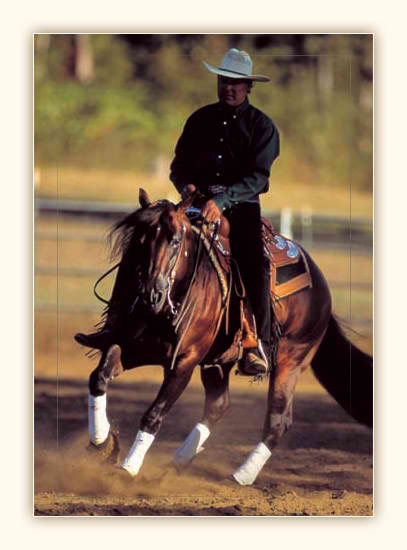 Lean With Me recovered from a pelvic fracture, winning a World title!

I have read the amazing story of an older horse, Lean With Me, who fractured his pelvis at the age of three. He was a show horse before the injury and, miraculously, he returned to showing AFTER his fracture…winning a World title. To read Lean With Me’s full story, click here.

Regarding the knee, I also knew a filly, just months old, that somehow chipped her knee. The location of the chip near the joint made it too risky to do surgery. The vet recommend letting her grow and looking at her again when the joint was bigger. If the chip was still floating then the vet would remove it. The chip did not remain floating but instead it calcified to the knee. This caused much of the knee joints to fuse also.

I took the mare to her follow up appointment. The vets did a lameness exam and reported that she had a limited range of motion, but that she didn’t appear to be in any pain. They gave me the OK to ride her as long as she remained comfortable. Before leaving the office they wanted to also do x-rays. Upon reading the x-rays the vets exclaimed, “If I had seen these x-rays first I would have said this horse was crippled and would be completely unsound.” She went on to win many events and has never been lame.

The story of your filly is a sad one. It is tempting to say that the barn owner should have known, or the first vet, or the second vet but generally things aren’t that clear. I am sure that if you had believed that something was major that you would have had the vet out directly. The first vet saw an elevated temp and soreness and likely went with a diagnosis that was either more common, more fitting or quite possibly also true. The second vet also had to make the decision to treat the most pressing issue, the knee.

Medically treating horses is always difficult because they cannot talk. The mare I described above with the knee issue would have been proclaimed a cripple by her x-rays…yet she is sound and happy. It sounds like your filly was a trooper and the emotional pain and financial costs are both depressing but try to remember that you did the best you could each step of the way and I’m sure Paris appreciated it.