Wow did it get HOT over the weekend! Thankfully it was only one day but a twenty degree increase in temperature is pretty hard to take. 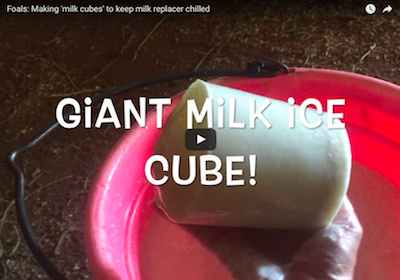 The drastic temperature increase caused me to introduce the foals to two new things;

I wish I had been recording when I plugged the ceiling fan…but I wasn’t. They were more curious than anything. In fact that has been one of the more interesting things about watching these two. Without a ‘mom’ who says, “Get back, get behind me, or stay away!” these guys really don’t startle much. I think this will change a bit more in the future when they are out in the full herd (but that remains to be seen months from now).

The other thing they were introduced to was ice cubes. The goal was to keep the milk replacer cool for longer. Victoria from Last Chance gave me the instructions. Thankfully for me, and the foals, the weather has been almost ideal from the time I brought them home; 70’s during the day and 50-60 at night. Except that 20 degree jump the other day to 95!  I know that many other places get (and stay) hotter than this…my issue was the sudden impact. Talk about hot babies!

As their surrogate mother I had to explain to them that sun bathing when you are soaked with sweat isn’t a good idea. I lock them out of their run out and in the stall with the fan…and a nice bucket of cool milk. My boys asked how the mare would have handled the situation and I pointed to the other adult horses standing in the shade in the pastures. They would go out and graze and then return to the shade. This didn’t occur to the foals:)

Here is a short video of the milk ice cube, and Justice investigating it.