Exercises for a horse moving his hip during the spin 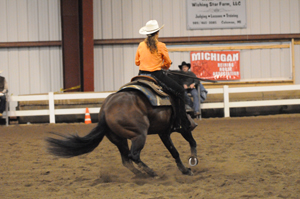 My name is KC, I met you at Equitana in Sydney. Thank you so much for coming to Australia, It was such an honor to meet you.

I wanted to come up and ask you but we had to head home, I’ve been having trouble when I teach my horse to spin he gets a basic steady spin but as soon as I ask him to speed up straight away he will lock up in the shoulders and flick his hip out, I’ve been told that its the position that im sitting, but I’ve tried to position differently but it isn’t seeming to make a difference, Im just wondering if you can tell me how to stop this, I have my other horse that I’m about to teach so I want to prevent it from happening with him too.

Thank you so much, and hope you had great visit in Australia! It was such an amazing experience meeting you.

Thanks for writing. I know what you are describing and I think it will be a challenge to describe the answer in an email…but I will try! Maybe I will have to try to make a video and do a blog about it…

There are several things you can do to help the hip from moving around. One exercise is the one that I demonstrated at Equitana where you trot a small circle (maybe 15-20 feet wide) and then cut it in half like a pie. Lots of horses that flip their hips at speed will flip their hip when you make the turn from the circle onto the straight line that dissects the circle. When you get onto the straight line it is important to ‘step on the gas’ and speed them up for a few steps. Really make them hustle or ‘squirt’ forward. It is actually the anticipation of the ‘squirting’ forward that eventually causes them to stop flipping their hip because they anticipate needing the hind end engaged for the ‘squirt’.

Another exercise is done inside the spin and requires a lot of ‘feel’ on the part of the rider. Have you ever ridden a horse that travels or moves during the spin? Lets say you start spinning and if you spin six revolutions you will end ten feet south of where you started? An exercise that we use is to continue spinning the horse and gradually move him back in the direction he came from (north in this case). This is done by (during the spin) gently pulling him back when he faces south and releasing the reins and squeezing with your legs when he faces north. Did I mention this takes a lot of feel?

The way this helps you is first off there is a good chance your horse is moving, secondly even if he is not you need to get him thinking about engaging his hip. I would try moving him slightly on purpose even if he is not moving because it will cause him to get more forward in his spins and give you more feel.

I hope this helps and maybe I can find a horse to video this with sometime.