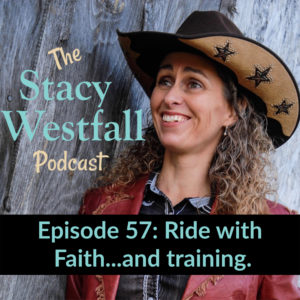 In this episode, Stacy explains that she has been pondering the answer she gave to a listener last week and she has more to add this week. She discusses the role of faith in horse training as well as mistakes she sees people make when they use the word ‘faith’ as applied to their horse.

Stacy also discusses how ‘good natured’ horses can still hurt people and why this happens.

Links mentioned in this episode: