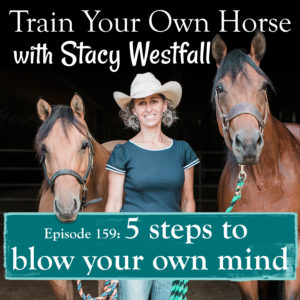 1- pick something that excites you and scares you a little
2-decide why you want to do it
3- decide why you haven’t done it yet
4- list as many steps as you can think of now (this won’t be accurate)
5- decide if you want to commit
AND…YOU MUST know in your bones if you’re willing.
Otherwise it’s ok to start over with a new goal.

Stacy Westfall: Did you hear that? That is a good line right there. Liberated from situational and self-judgment, I’m telling you, if you get there, you can go anywhere you choose. So do you see how this works? This is why goal setting is so exciting to me because the goals help us become the person that we want to be that confident person. That person the is a problem solver, a capable student of the horse liberated from situational and self-judgment. For this podcast, I want to talk a bit about who you could become on the way to reaching your goals. I love looking back and being amazed at the things I’ve done, and all of these ladies can look back and be amazed at what they accomplished. And then what happens is they can take that feeling with them into the next goal. So think about it right now. There’s an excellent chance that you’re doing something in your life that you once were not sure you could do. Outside of the horses, maybe it’s driving a car, being a parent. Maybe it is owning a horse. Maybe it’s running a business. So sometimes you have to think in a broad sense to be able to get started with this thinking if you haven’t practiced it. But right now, what if the person you are right now thinks that you can’t do something? It seems impossible. But what if that’s not true? What if the person you are right now is capable of doing that thing? I told you guys, you know, back in Episode 149 that I didn’t consider myself a runner. And yet this year I ran a 10k. So, you know, 10 years ago when I said I wasn’t a runner, was I correct or was I wrong? You know, I was–I think I was wrong. I was just a runner that hadn’t realized I was a runner yet. So it’s kind of cool when you can start thinking about the impossible in a different kind of way. Just because something seems impossible because right now you haven’t done it yet doesn’t mean that you can’t do it or if you could magically look forward 10 years that you haven’t already done it. So it’s really interesting if I really wanted to, what could I do? What would I have to do to close the gap between impossible and done? So what I want to share with you now are five different steps that I go through when I’m working on this because I’ve warned you before the goal setting is coming. And this is a sneaky little beginning of the goal-setting because I don’t believe in just sitting down on New Year’s Eve and writing whatever comes to my mind because I don’t think it’s going to be really accurate. And here’s why. For me, the way that this works is I want to be intentional. So the first thing I do is I pick something that excites me and scares me just a little bit. So I want it to be big enough that it’s not just like a rinse and repeat. I want it to excite me and maybe just scare me a little bit. Then number two, I want to decide why I want to do it, because this kind of separates out whether or not it’s really mine, or whether it’s just sort of like one of those things that floats around the world and you just kind of grab hold of it and you think, Oh, yeah, that sounds like a good goal. So number one, pick something that excites me or scares me a little bit. Number two, decide why I want to do it. Number three, decide why I haven’t done it yet. Number four, list as many steps as I can think of right now. I had–full disclosure. This will not be accurate. If you do this exercise and then a year later, after achieving your goal or 10 years later after achieving your goal, if you look back, you will have a lot more steps than you think. But right now? List as many steps as you can think of and then number five, then that’s when you decide if you want to commit. See how this doesn’t work if you just write down 10 things come to your mind on–on, you know, December 31st, January 1st, somewhere around that New Year’s thing? Because you need the time to actually understand if it excites you. Does it scare you a little bit? Why do you want to do it? Why haven’t you done it? How many steps can you think of to get there? That helps me a lot of times with the timeline of whether I’m thinking about this as being a one year goal or a five-year goal. And then, then that’s when I get to number five and then it could be on the list for what I actually want to commit to.