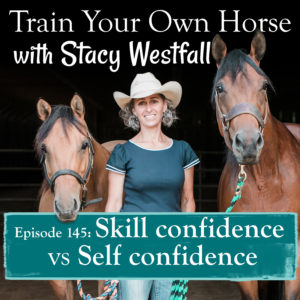 If you’re in the middle of a work session and things aren’t going the way you hoped do you lose confidence?
How does this impact your time with your horse?
In this episode I propose the idea that we can have different types of confidence. I outline ’self’ confidence vs ‘skill’ confidence and explain why knowing the difference could improve your results with your horse.