Episode 134: How do you get that bond and trust with your horses? 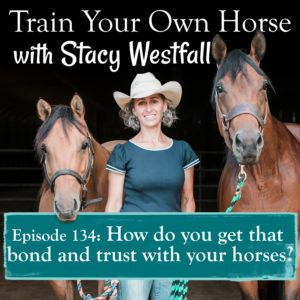 To answer the question of creating a bond of trust I discuss the balancing act of Training & Time.
How much time does it take? What is the flaw of time? (Answer: being boring)
How do you train while honoring the horses questions and understanding the emotional level? Does increasing the physical level of communication impact the emotional understanding?
I know that I develop a deep bond with my horses because I do both time and training. In this episode I explain how.

Stacy Westfall: Hi, I’m Stacy Westfall, and I’m here to teach you how to understand, enjoy, and successfully train your own horses. Today, I’m answering a question about how I develop the bond and the trust that I do with my horses. Let’s listen to the question.

Caller: Hi, Stacy. I’ve had my horse for a little over a year and we’re still working on his emotional state and getting that bond where he trusts me. Some days he’ll just let me do whatever and other days he’s jumpy and seems almost fearful and I just wanted to see what you do to get that bond and trust with your horses, if there’s any actionable steps I could take just to get that better partnership on the emotional and trust level. Thanks so much for your help.

Stacy Westfall: Thanks for your question, and I love that you were really specific about looking for actionable steps to get that better partnership and level of trust. This is great timing for this question because of the weekend that I just had. I was at a reining show and I had all three of my horses there, Gabby, Willow, and yes, even Presto were all at the reining show. And I experienced a huge shift with Presto and Willow and I think those will help illustrate my answer to this question. I’m also going to break this down into some different concepts for you to consider. I want you to think about it through these different lenses, the combination of time and training and the idea of emotional levels and physical levels of training. So to me, this is where the dance happens. How much time can you add or spend without being boring? And how much training can you do without being overwhelming? And how do you consider the horse’s emotional level? Which is kind of maybe–maybe we could explain it as how the horse feels about what’s going on or during the work. So there’s an emotional level going on there and then the physical level, what the horse can and will do with their bodies. So there’s this dance between time and training and the physical and the emotional levels. I think this might be more clear if I illustrate some of the common problems that I see in these categories I just mentioned.

Stacy Westfall: So in the time category, one issue that I sometimes see with people is that they think if I spend a lot of time with my horse, this will equal a better relationship. However, I think it’s important to look at the horse’s experience because sometimes you can look at a horse that is very bored, meaning you can go sit in the pasture, but does the horse want to be anywhere near you? Is there anything interesting about you? So do I think time plays a part? Absolutely. But if time has a flaw, it can be boring and that doesn’t necessarily equal a better relationship. Now, on the other side, you can also look at time and easily see that there could be not enough time allowed for the training. So maybe the horse doesn’t get a chance to know you or you’re just not there very often, they don’t see you very often, or when they do, it’s real heavy on the training. And so there’s just kind of not enough time invested in the particular horse to develop that relationship. When you look at the training and we look at–when we look at the training piece of it, that’s where we kind of get into that emotional and physical dance. And you can say that when we’re looking at the training, if there’s not enough training, sometimes what’s missing there is there’s not a chance to develop the language with the horse. And that can be the language of groundwork or the language of ridden work. But if the horse lacks the skills to communicate or the person lacks the skills to read and read and understand the horse, which is again, communicate, if there’s not enough training involved, then that’s a challenge because it becomes a language barrier. And you can see how the language barrier there could also play into that dance with time, not enough of it or time, lots of it. “But it’s boring,” is also going to be influenced by this training. And then I think a lot of times when people think about training, there is this fear that they’re going to maybe come across as a dictator and that they’re not interested at all in the horse’s experience. I think that’s sometimes the category that some horse trainers get kind of shoved over into. And for sure, that can be a thing where that could be a training style where they don’t want feedback from the horse. And I think that’s a fear that a lot of people training their own horses have. They don’t want to come across like that. But that’s another piece of that puzzle of like sometimes when people are trying to spend less time then they try to go a little heavier on the training. And that’s where they can potentially, you know, rock that balance maybe too much towards the training and not enough towards the time. Because at the end of the day, what this is, is it’s a balancing act between the time and the training. And one of the big dictators of this being like what the outcome is is that horse as an individual. So each individual horse has their own learning style. And that’s why it’s hard to say that there’s this exact method, exact amount of time, exact amount of training. That gets you an exact result. So this another way to illustrate the dance would be could you double the time that you spend with the horse and do less training and get the same result? Or could you flip it the other way? Could you double that training and take less time? So this is always this dance back and forth between what’s going on. And at the end of the–end of the day, I know that I developed a deep bond with the horses I have because I do both as much as I can. Time and training.

Announcer: If you enjoy listening to Stacy’s podcast, please visit stacywestfall.com for articles, videos and tips to help you and your horse succeed.