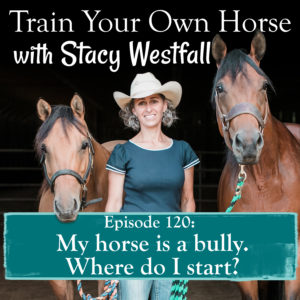 The first six minutes of this episode could change how you think about horses forever.
Where would you start with a horse that is a bully when leading to and from the pasture, pins ears when feeding, pulls back with the farrier and sometimes when trailer loading too…
On a positive note she does collect well in the ring at the walk, trot and canter but will sometimes take off when out fox hunting.
I discuss the overall issue as well as action steps that can be taken.

Caller 1: Hi Stacy. My name is Tina Moore. I first met you at Road to the Horse when you were, when you won, with Popcorn. I have always ridden Western and ridden quarter horses. I currently have purchased a 14-year-old mare off the track thoroughbred and I am foxhunting. Her name is Contessa. The lady that owned her before me fox hunted her and she allowed Contessa to bully her. Contessa is very well collected in the rein, with walk, trot, and canter, but in the foxhunting field, she sometimes wants to take off and I cannot collect her. She is a bully when leading her to and from the pasture. She pins her ears in the stall when I’m feeding her and she pulls back with the farrier and sometimes when I’m loading her on the trailer. My question is where do I start with her? I think that she needs some groundwork and to learn some ground manners. I do not know what ground training she may have had up until this point. I look forward to hearing how you would get her started. Thank you so much. I have been binge listening to your podcast.

So then I’m just going to give you a couple more ideas, like I didn’t give enough yet, but I’m going to move it to the–onto the horse’s back for a minute. You know, she’s pretty good when you ride her in the arena. But you also know that when the energy level goes up out in the field, that she gets a lot more up. You can build a bridge there. You can take her to the regular arena and you can say, how can we make the regular arena a little bit more exciting? I’ll link in the show notes to the podcast where I talked about that not too long ago, answering a listener question about preparing a horse for the unknown things out on the trail and you start making things more creative. There you go. What happens if I ride with a reining horse that’s running large fast circles in the arena? Does that set my–my horse off? Like, you start thinking like, OK, maybe it doesn’t have to be a reining horse. Maybe it can be somebody with a horse that can run large fast circles in this arena while I do something a lower energy. Does that trigger my horse? And then you think back and you start going, wow. With all this awareness I got from the stall exercise and this leading exercise, I’m now thinking, geez, when I think back to the last time I took her out in the field, was she 80 percent up when I arrived? Or, wait, no, she was actually pretty good when I arrived and she was pretty good when I mounted. It wasn’t really until that first gallop or maybe it was when she first arrived. And then you have more knowledge of maybe you need to go arrive more places that don’t end with running fast somewhere. Maybe you need to add more trips, places where it stays low. But if it wasn’t triggered until the first gallop, maybe you have to interrupt that a different way. And so it’s really so fascinating when you start looking at how the overall thinking starts tying together with these little daily things and how you’re showing up in those little daily things, confident with this powerful low energy and then knowing what to do and then recognizing when the energy changes and making new plans and understanding the attention to detail of, like you, how you’re showing up, how she’s showing up, how other horses are showing up, how that’s triggering her, what’s not triggering her, where she is good. This is such a dance. I love horse training. I love being trained by horses because that’s also what I feel like is happening. That statement is a trigger for some people. If I say the horses are training me, some people, they get really up in arms with that thought. But if it’s a conversation that I’m always learning something from the horse, and if I say I’m learning something from the horse, people are like, that sounds amazing. I want to learn. But if I say it in a different way, I’m being trained by this horse. Now, granted, that could be that the horse has trained you how to behave a certain way, meaning they’re making the decisions. But it’s fascinating to think about how just the way we phrase it and think about it brings up different reactions. So, Tina, thank you for sending me off on this creative, chaotic, maybe tangent of thinking and thank you to everyone who listened this far and entertained my interesting opening. If you thought that interesting opening got you thinking in a different way, you might really enjoy going back and listening to Episode 68, where the podcast was titled, How to Teach a Horse to Spook. Yeah, not how to teach him not to spook, but how do you teach a horse to spook? Because it’s always interesting if you turn it around. If you know how to make them spook, you then actually know how to teach them not to spook, how to avoid that. Now I’m thinking I should do an entire season from the horse’s point of view. Maybe I should take Contessa’s voice and all these other horses, maybe they should be the one. Maybe I should do it all from the horse’s point of view for an entire season. If you like that idea, give me some feedback. Let me know by leaving me a message on the voicemail hotline or you can go over to the blog over at stacywestfall.com. You can find this podcast and leave a comment there. Thanks for listening and I’ll talk to you again in the next episode.