Episode 113: How to calendar your horse goals 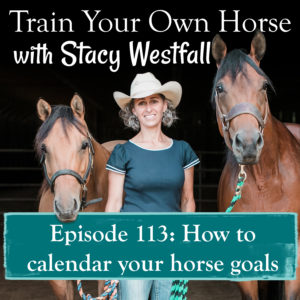 In a perfect world…what would this year look like with your horse?
What would you accomplish?
In January of 2022…what would you like to have achieved?
In this podcast I share with you how I use my calendar and tracking to get so much done.
One of the reasons that I take January goal setting so seriously is because with three horses, show goals, family commitments, and a business to run I see a huge benefit to planning ahead.

Episode 113-How to calendar your horse goals5.mp3

Announcer: [00:00:03] Podcasting from a little cabin on a hill, this is the Stacy Westfall podcast, Stacy’s goal is simple: to teach you to understand why horses do what they do, as well as the action steps for creating clear, confident communication with your horses.

Stacy Westfall: [00:00:23] Hi, I’m Stacy Westfall, and I’m here to teach you how to understand, enjoy, and successfully train your own horses.In the last two podcasts, I have covered 3 reasons you’re afraid to set big goals with your horses. And I answered the question, “Can you have a relationship and get results with your horse?” In this podcast, I’m going to walk you through how I take those concepts and now take my goals with my horses and make them into smart goals, and I’m going to use the upcoming 2021 season and my own horses as an example so that you can hopefully get inspired to do the same thing. So I talked about smart goals in Episode 7 of this podcast, but that was more than 100 episodes ago. So let’s take just a minute and refresh.

Stacy Westfall: [00:01:25] So a SMART goal–SMART stands for specific, measurable, actionable, relevant and time bound. And so that’s what I want you to be listening to while you’re while you’re listening to this podcast. Listen for how specific and measurable my goals are and the action steps I’m going to calendar in and how those are relevant to what I want to achieve by the end of the year. And you’ll see the time bound things that are going to lead me to the end of the year. So last year, just a quick thought after recording it, I made the podcast on relationships and results and I kind of wondered after I released it whether or not I made setting like big goals almost sound irrelevant. And it’s really interesting because I love the relationship with my horses, but I also love setting really big goals. And I actually think it’s my superpower that I value the relationship so I can set these big goals. I don’t feel any conflict, but I also feel this immense freedom while I’m going after these goals. And so that’s what I was trying to get across. But I really, really, really do believe that you can have both. So if this podcast starts to sound a little bit too goal heavy, because it might, make sure that you go back and listen or listen again to Episode 112, which could almost sound a little bit relationship heavy. Now, let’s go on to making my goals with my horses for 2021 SMART goals. So first, I just want to say, if you haven’t set your goals for this year, one piece of advice I would give you is I would say, look at it like this. Take yourself a year into the future. Go to January 2022. Wow, that’s a number. And in a perfect world, if you had the perfect year with your horse this year, you get to the end of the year, it’s January 2022. What would you have achieved with your horse? And I think this exercise is helpful in a couple different ways. I think it’s helpful if you’ve been vague and–it–and you’re not really clear about what you want to do at all. And I also think it’s helpful if you have multiple goals and you’re not quite sure which one to prioritize. Because to me, I tend to have that. The second problem is the problem I run into more often in this area of my life. I use this in other areas and the unclear thing comes up more for me there. So in this one, if I’m looking at someone like Willow, so I’m looking at Willow, for example, and I have multiple goals with her. And I’m not–not quite clear then what I do is I imagine myself January 2022 and I imagine the different end results. So for example, earning my silver medal in traditional dressage with Willow is at the top of my list. Earning money in reining–in NRHA reining money–is also on the list. Riding in a working equitation clinic is on the list. And so I’ve got all these different things on the list. When I look at the list, I go out to January 2022 in my head and I think what’s the one that I would be really excited if I had achieved? And if I put earning reining money in there, I’m like, that’s good. But if I put my silver medal in traditional dressage, I’m over the moon excited. I’m like, oh, could I really do that with Willow this year? Really? So I just kind of put myself out into that future and I then come back here and I already know which one’s going to make me more excited, so I go ahead and pick that one.

Stacy Westfall: [00:18:56] Now, I think that when you look at a horse like Presto, it might be tempting to think that it’s not, as you know, scheduled or as important or as specific or measurable or relevant or time bound or some of these SMART things. But when I look at Presto, I actually I keep a calendar on my wall where I write down riding the horses–and every day. So if I ride the horse, their name goes on the calendar, and if I’m riding them on the trails and I want to track how far, then I write down how many miles I went. So depending on what I’m tracking, but they get written down there. So I am tracking the–that daily stuff that I say, the relationship stuff, I’m–I’m not tracking the feeding because I kind of know if I fed them twice a day. But I’m tracking the riding and I’m tracking those little–those little relationship-building things. But I can also go ahead and count with Presto, I can make that count as his specific, measurable, actionable, relevant, time bound things. So when I look at Presto, my two big top goals, I read a lot of goals in the last podcast. My two big ones for him were show at a live dressage show and trail ride. And so I’m actually going to be pretty flexible about when and where I show him. So for right now, it’s January. I’m not even asking myself the question which shows for him. I won’t even look about it because it’s because I only want to go to one show and he’s never been there. I’m completely fine with not even trying to look at what that show would be until I hit June or July, because there will be a lot of other show opportunities in the second half of the year. But even though the showing of him is a big goal and I’m kind of pushing it out there, I have it by the end of the year. So that leaves me a lot of flexibility. So I’m fine with putting it off for the first six months, but that doesn’t mean that I want to just leave him alone for the next six months. So it still comes back to my goal with him is going to be ride him 4-6 times a week. And then I’m also because of that trail riding goal, I’m also going to look back to a goal I had before with Willow. I’m going to nearly copy a goal that I had for Willow in 2017. So in 2017 with Willow, my goal with her was to ride her every day out on the trails if it was safe. So if it was really muddy or lightning or down pouring rain or icy snowy, I didn’t ride out on the trails. But every day that it was safe I rode her on the trails. So I layered that base amount of work, like for Presto I just said 4-6 times a week. I layered that like, I want to ride you 4-6 times a week as my baseline. I layered that with, and every single time it can be on the trail. That’s where you’re going to be doing it, and that’s what I’m going to do with Presto again this year. Because he–remember last year, my goal was to just be able to trail ride him, just get him out there. And so I think that what Presto mostly needs to reach, that end goal of being able to go to just the one show, is actually just a lot of hours in the saddle, just a lot of life experience. And I think we can do that going up and down the trail. And I think that the trail and the hills are going to strengthen him both physically and mentally. And so even though to someone watching, it might look like I’m just trail riding a lot, I’m actually reaching a lot of specific, measurable, actionable, relevant, time bound goals, even with Presto.

Stacy Westfall: [00:22:52] So I hope this episode clears up a little bit of why I am so serious about my January goal setting. One of the reasons is because I’m setting goals with the horses and the calendaring and the overlaying especially of multiple disciplines and multiple horses in multiple disciplines. I really need to see those immovable blocks on my calendar as soon as possible because I’ve got three horses, show goals, family commitments, a business that I actually run over here, and I really see this huge benefit to getting all these big rocks, these big things on my calendar as soon as I can. Because then I can start moving around some of those things that are a little bit more within my control, like when I’m going to put my travel to Maine and when I’m going to visit family and when I’m going to book my clinics and those different things. Those can start to go on the calendar. But I want to it all. I want to do it all. I want to do it all. So that requires a fairly intense, information gathering January for me. So I hope you found that helpful. If you want to know how to reach for a bunch of things all at the same time without losing your mind, combine what I talked about in the last three podcasts, and I’m telling you, it’s amazing. Thanks for listening and I will talk to you again in the next episode.

Announcer: [00:24:22] If you enjoy listening to Stacy’s podcast, please visit stacywestfall.com for articles, videos and tips to help you and your horse succeed.

Episode 112: Can you have relationship AND results with your horse?