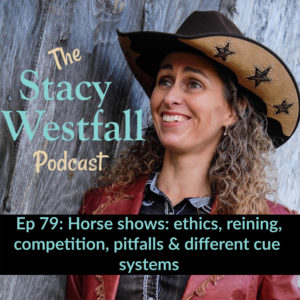 Today, I’m answering two questions that were left on my voicemail line (the orange tab on the right side of the home page). Both of these involve the idea of riding different disciplines. The first question discusses ethics, showing, and competition. And the second question is more about how to handle the apparent contradictions between some disciplines and their cue systems.

SWS080.mp3
[00:00:03] Podcasting from a little cabin on a hill. This is the Stacy Westfall podcast. Stacy’s goal is simple to teach you to understand why horses do what they do, as well as the action steps for creating clear, confident communication with your horses.