Question: “I would love to learn more about where Presto is at with his training. What challenges have you had with the difference in his breed compared to quarter horses? Or just in his personality being raised by humans instead of horses?” 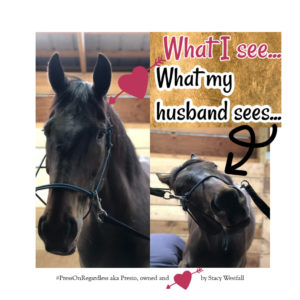 I love to gather information…but I also like to keep in mind that what matters most is what is happening today. Right now. In front of me.

When I adopted Presto, I was hoping to explore and learn more about how he might have been influenced by being an orphan or by being a different breed.
Here is how I think about it.
For example, orphan foals have the stigma attached to them that they are often pushy. Is this caused by their early handling? Lack of their original mother? Or their breed?

To sort this out I could ask myself some questions:
Q- Is Presto PUSHIER than any other foal I have raised?
A-No

Q-Does Presto’s breeding play a part in this?
A-I don’t want to base my entire view of a breed on one horse. If Presto were in the top 10% I might look toward some other factor that was influencing him, which could include his breed, but as he is well within the typical range of all horses I’ve handled, I’m not looking to explain it some other way.

Q-Is there anywhere you DO see his different breeding changing things?
A- Yes. Presto is probably a cross between Appaloosa, Thoroughbred, and Percheron. He is has been physically slower to mature than many of my Quarter Horses and I waited an extra year to even begin starting him under saddle. When I did start him I went much slower with shorter and more infrequent rides. I started riding him more consistently about two years later than many of my other performance horses.
Presto has also been slower to mature mentally. I often wonder if this was due to how sick he was for the first month of his life. He was very, very sick and the physical evidence was easy to see…but I wonder if it influenced his mind also.

Q-But then, again, I ask the question…does it matter? Would I handle him any differently if I didn’t know his background?
A- No. I commit to handling what is in front of me. I do ‘gather’ and store information so I can reflect later but I still handle him the same as any other horse without the orphan story.

Q-Is Presto slower than any horse you have worked with?
A- No

Q-Is Presto in the slowest 10% of horses you have worked with?
A- Maybe. Presto is definitely what I would call a slow thinker. There are many horses that are naturally slow thinkers. Slow thinking can be an amazing thing…and it can also be frustrating.
Slow thinking horses tend to take a long time to catch onto things…but once they catch on…they tend to retain the information VERY well.
Many training styles do NOT take slow thinking into consideration. This is interesting because ultimately most riders want a horse that is not overly reactive. Yet, if you rush a slow thinker they tend to switch into a reactive mindset.
Once slow thinkers learn how something works, they can then perform quickly, and it will not be visible that they were ever slow thinkers.

How much of Presto’s behavior was influenced by being an orphan, his breed, or experience? I’ll keep gathering information from Presto and looking for extreme behavior that would point towards something out of the norm.
He does have one habit that I do think has its roots in being an orphan: he sucks his tongue.
But…I’ve also had a fair number of people report to me that their ‘non-orphan’ horse do this too!!!

It would be easy to make a case that he has been influenced by all of these things…but I would still ask the question…does it matter?

It only matters if it can somehow help. If the label of orphan or the description of his breed is used in any way to limit his potential…I don’t think that is useful.
At the end of the day what matters most is the potential that I see when I look at him….and even that must be the potential HE contains. Not a comparison of his potential compared to another horse or a different path in life.

Presto is a clown. And because of that, we do joke about him. All of our other horses have famous bloodlines that can be traced for generations.
And then there is Presto. Making funny faces, trying to figure things out in his own time, and making us laugh with his simple, silly antics.

————————————–
I’ve owned Presto now for four years. He has grown so much and I’m finally ready to start sharing his adventures.
What questions do you have for me?
#PressonRegardless #Presto #Equithrive