A reiner at a dressage show.

I have to admit…I feel a bit out of place.

Aside from attending a small schooling show this is the first dressage show I have attended with the intent of being an avid spectator and fan of the sport. I have had a life long fascination with the discipline which began with watching the Olympics on TV as a child.

As a teen, my mother and I took lessons for a few months at a dressage barn in Maine. There was such a gap in our knowledge and our horses at home that although we found it interesting we didn’t continue.

I responded, “OK, I want the saddle, the clothes and the BIG moving horse!”

We both laughed and then talked a little more seriously about what dressage was and how it related to what I was doing with my reining horses. I will save those thoughts and ideas for another blog.

That conversation with Jane happened ten years ago and still my fascination with the sport continues. Is it still the seed that was planted while watching the Olympics as a child? Is it a desire to keep learning? Or is it the BIG horses that fascinate me?

Maybe it is a bit of all of it.

Yesterday I spend my first day at a dressage show.

Under my turtleneck and sweater (what does one wear to a dressage event?)…I still wore my belt buckle.

At the end of the day two things were clear.

#1-I’m still fascinated with the sport.

#2-A reiner…horseman…colt starter…whatever I am can learn things from the sport. 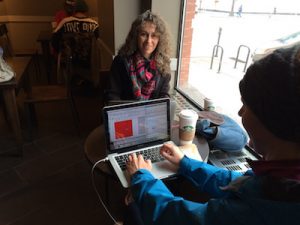 Now it is time to pack up my laptop from my table here at Starbuck and make my way over to the event. 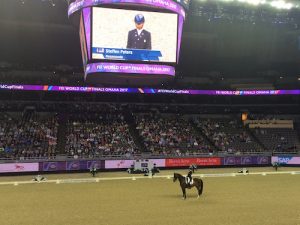 Stefan Peters is a four-time Olympic dressage competitor and three-time USEF Horseman of the Year. 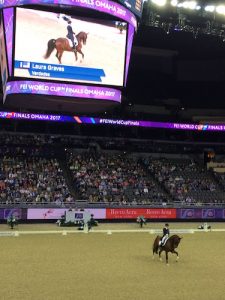 Laura Graves is an American Olympic dressage rider with an amazing life story. Google it! 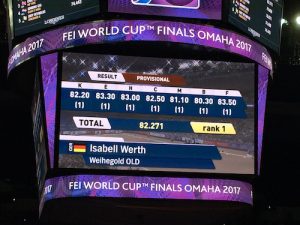 Isabell Werth holds the record for the most Olympic medals won by any equestrian athlete…and she is teaching today. Guess who I’m learning from today?