What is a 'dropped shoulder' in a horse and how can I fix it? 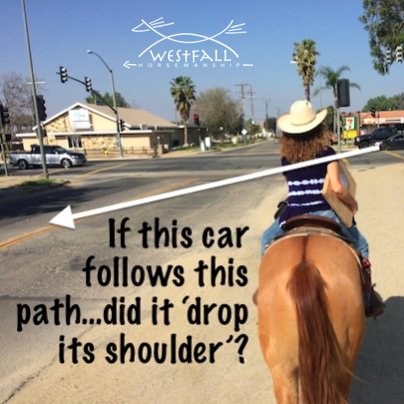 “I’ve been yelled at – and still don’t know what a dropped shoulder is.”-Karen S.

This is a great example of a confusing term. I agree that people over use this term AND I believe it would be possible to sit down with three different professionals and have at least three different definitions of the term.

Soon the horse thinks, “A left turn is coming….lets do it now.” and the ‘dropped’ shoulder has begun. Keep in mind that the shoulder can’t be ‘dropped’ unless at some point it is being held. Stop ‘holding the shoulder up’ and what happens?

I would argue that most of the time a ‘dropped shoulder’ is nothing more than cutting a corner. Ever been at a 4 way stop in your car? Ever had someone turn and almost hit the front corner of your car? They were ‘dropping their shoulder’….but clearly the car wasn’t leaning. People tend to mean ‘dropping the shoulder’ when the horse is simply ‘turning too early’.

Is it fixable? Yes, but the rider has to be willing to stop ‘holding him up’ and let him make the mistake. When he leaves the path of travel the rider needs to correct it…and then let him go and probably make the mistake again. Ultimately the horse must become responsible for ‘holding’ his own shoulder up because he knows you will correct him and then let go again. There is a huge difference between correcting the issue vs becoming part of the problem.

This is how I define a dropped shoulder…but is that what your riding instructor means?