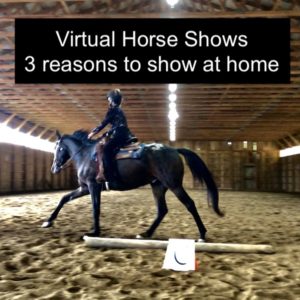 Have you entered a ‘virtual’ horse show?
The Western Dressage World show is my first record-at-home horse show…and it has been quite a learning curve!
My initial thought was that I would have two main challenges
#1-cleaning the horse up like a regular show
#2-getting someone to run the camera

?For my first recording attempt I spent more time prepping the arena than I did prepping Presto!?
First, I pulled a few weeds that want to pop up in the corners and I evened out the sand. Then I looked through the camera.
I realized pretty quickly that the cones I had were not very visible through the camera. So I ordered more cones and bought some of the GIANT dressage letters I’ve been wanting for years. There is nothing like recording your arena to inspire you to clean it up!
I figured that half of the hard stuff was done so I decided to try a test ride.

I reasoned that a test ride would be similar to what I would have done the night before at an ‘in person’ show to practice. I also though, “I’m at home…so this should be easier.”
??Boy was I wrong!
My shiny new cones, shiny new letters, odd poles on the ground forming the end of my show arena…my husband in a chair with a tripod and camera…were MORE THAN ENOUGH to make things hard.
I also put on my sparkly shirt, sparkly chaps and different saddle pad…at that point Presto was quite sure we were NOT a home any more.

☢️At least not the home he was familiar with.

As I warmed Presto up I could feel his apprehension. I could also feel how I was preparing differently than I would for a normal ride. That is when it first dawned on me that showing at home… is a BRILLIANT IDEA!✨

I often wait until the show season comes to begin hauling young horses like Presto to shows. Then I expect to haul for awhile before I begin showing. By ‘showing’ at home I’m going to be able to shorten the gap, and therefore the stress, that my future horses experience when going to shows.

I’ve always know that it is important to build ‘bridges’ between the work you do at home and the work you do when you haul somewhere: show, trail ride, fair, friends house, etc.
?This happens to be the first time it has occurred to me just how effectively I could recreate a ‘show’ environment at home. After riding my first test I realized that I wasn’t using any voice cues with Presto. I’ve been in the habit of showing my more advanced horses…but Presto is accustom to me talking to him from time to time. During my second ride I added more talking…and it helped him relax (voice cues are allowed in WD classes). On top of Presto’s environment changing he must have also wondered why I had suddenly changed. These are great things for me to have an awareness of for next time!

??My plan for the day was to record a couple of rides and then check the video. It’s was a good plan because it revealed another challenge I’m going to have: shadows in the corners.
?I’m blessed to have an indoor arena that is the correct size…but I didn’t factor in the sun spots and shadows. I chose a time that worked in my schedule and my husbands schedule but next time I also need to factor in the sun. The video along one side of the arena is very dark because of a light panel we have in the upper wall of the arena messing with the camera sensor.

Still the practice was great. The parts of the video that were clear were great for giving me feedback. Presto looks so cute!?
And now I know more than I did before I started this journey.?
Virtual shows here I come!
?And I look forward to ‘real’ horse shows…the ones where I just show up, clean up and ride!
—————-
I’ve owned Presto now for four years. He has grown so much and I’m finally ready to start sharing his adventures. You can find all of his posts on my website (stacywestfall.com)
What questions do you have for me about Presto?
#PressonRegardless #Presto #Equithrive