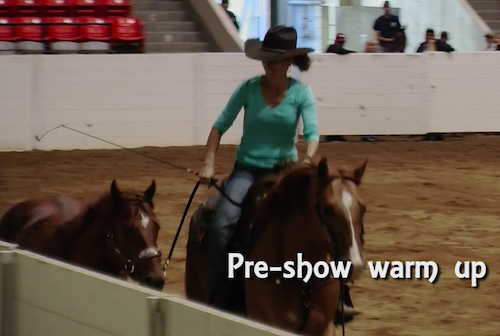 Stacy warming up Jac and Newt before the Congress freestyle 2013.

Jac’s first trip to a horse show was a visit to the All American Quarter Horse Congress…during the freestyle reining.

Jac wasn’t ready to show, but I wanted to introduce people to Jac…and introduce Jac to people.

Jac’s training has progressed well to this point but I decided that it wasn’t fair to expect Jac to handle the emotional pressure of over 5,000 people in the crowd by himself, so I decided to pony (lead) him in from an older horse.

Notice at 3:35 how Jac reacts when the crowd begins to applaud. Eventually, I will have Jac trained to listen to me under pressure. The process of training a horse to handle the pressure from the crowd will involve gradually increasing the pressure on Jac in varying ways at home; example of this already exist including:

Notice at 9:50 when the crowd applauds again how differently Jac responds. This is because during the first occurrence of the ‘crowd pressure’ he was handled in a way he was accustomed to at home. This gave him confidence in the leader, in this case a combination of me and Newt. Eventually that leader will be the rider alone. The choice to pony is also a great example of prevention; I prevented a potential problem with creative thinking.

This was an emotional moment for me with Jac because it had such a feeling of ‘coming full circle’. You may remember from watching the pilot episode that I trained Jac’s grandmother. Then I trained Roxy and competed in the same arena I was now leading Jac in. Roxy impacted the world…but she was still my personal friend. Although the memories often bring me tears they are not often sadness anymore, instead they are gratefulness that I was able to experience the intimate knowing of a horse like Roxy, tinged with joy, wonder, and an intensity of emotions I cannot put into words.

Although nobody can replace her, Roxy’s spirit lives on, not only in our hearts, but in Jac as well.