Stacy’s Video Diary: Jac- Episode 22-When a horse goes lame or gets sore

At this point Jac has been in training with me for about two months. During this time I have been gradually building up the amount of work he does. When Jac went lame he was on a plateau; I had been maintaining a level amount of work. I was actually counting the number of times I went around the arena.

To put the amount of work Jac was doing into perspective, lets compare it to my sons who run cross county. 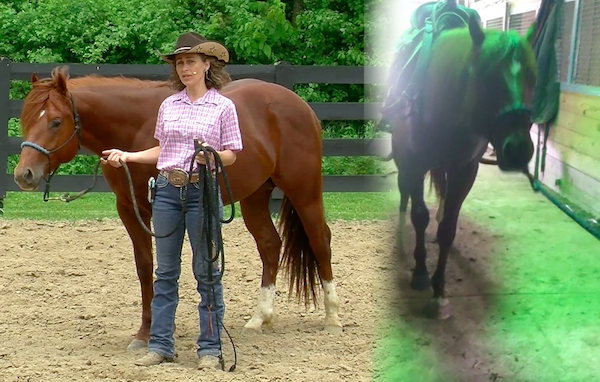 When the kids practice for a 3 mile race, their ‘long day’ practices have them running five to six miles. I rode Jac a total of 3 miles the day he got sore.

Deciding what to do when a horse gets sore depends on what might have happened and how comfortable you are with making the decision. I knew Jac had been very sound and I could eliminate the possibility that he had been kicked by another horse, cast in the stall, etc.

Jac had no heat or swelling. My guess was that he had either stepped on something and bruised his foot or somehow stepped wrong.

The farrier came out and did find a spot on his heel that was very sensitive. You can see in the video that Jac would jerk his hoof away. Maybe this was the problem?

For now Jac is getting time off and rest, either in a stall or a small turn out pen.