Presto: 50 miles on the trails! 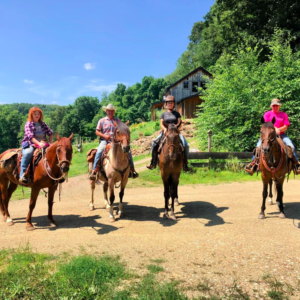 It seems like it took forever to get to the point where I believed that Presto was ready to go riding on the trails…and then I blinked and we had logged 50 miles!
I had no specific milage goals when I started but I have been keeping track for fun. Here are some of my observations after 50 miles on the trails.
🐴Presto has learned to shorten his steps when walking down steep hills (he previously wanted to rush down)
🐴Presto has learned to ‘put it in low gear’ and use a powerful walk going up hills (he previously wanted to rush up)
🐴Presto has a greater awareness of where his feet are about to land and trips much less often (he previously looked around without paying attention to his feet, now he can look and know where his feet are)
While out on our rides we have seen deer🦌, fox🦊, chipmunks, squirrels🐿, other horses and riders and hikers. We have ridden with horses that Presto knows well, we have ridden alone, and we have ridden with horses that Presto met that day.
He has taken most of this in stride. The most excited or worked up that he has gotten was on the day this photo was taken, which was also the day we logged mile number 50.
He was surprised when we rode up the hill into the camping/parking area for the state park. I was meeting up with a group of horses that he didn’t know. It didn’t occur to me that every time he has been to the parking area it has been nearly empty. However, on this day it was quite full.
There are many reactions Presto could have had.
He could have become nervous, started prancing, tried to turn and go home…but what he chose to do was talk…a LOT!
He appeared to whinny at each horse in the camp…individually.
Yes, I was the rider that you could hear coming a mile away!
I’m not sure why he chose to be so vocal. At home he is somewhat vocal but not excessive. When I have hauled him he has been somewhat vocal but not excessive. This day he seemed…surprised.
And very vocal.
The other interesting observation I made was that he didn’t change his way of going. He didn’t get quicker or slower. He didn’t stop or try to turn. He simply walked & talked.
Of all the ways he could have expressed his surprise, I’ll take that reaction every time. Especially considering that as we stood waiting for the other riders to saddle up he stopped whinnying and simply looked around. Again, no nervous body movements.
My final observation after 50 miles of trails is that I’m ready for another round of arena riding. There are some things that are harder to do on my trails so I need to go back to the arena to practice them.
For example, the vast majority of the trail rides have been at a walk. I would like to return to the arena to do more trot and canter work.
He has become very ‘solid’ feeling on the way down the trail but I haven’t worked on much collection.
While I like that he has learned to make his own decisions about where to put his feet, I also want to reconfirm that he will still allow me to be specific and detailed with his steering at all gaits.
I’m not sure how many miles he will go before I stop trail riding in the fall due to excessive mud or hunting season. Although I would love to be out there every day, I also realize that rest days and arena work are great for keeping Presto physically and mentally healthy.
I recently released a podcast talking about the most common mistake people make when trail riding. In the podcast I go deeper into riding the trails and how trail work and arena work can help each other out. I’ll put a link in the comments or you can search in any podcast player for Stacy Westfall.
——————————–
I’ve owned Presto now for four years. He has grown so much and I’m finally ready to start sharing his adventures. You can find all of his posts on my website (stacywestfall_com)
What questions do you have for me about Presto?
#PressonRegardless #Presto #Equithrive