“People have problems with horses because they either don’t know or don’t pay attention.” Jesse Westfall quote 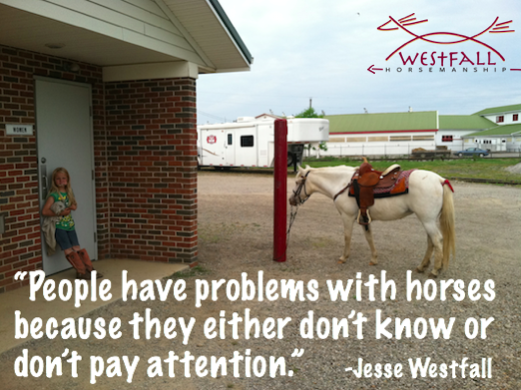 My husband, Jesse, was giving a lesson one day and I heard him say, “People have problems with horses because they either don’t know or don’t pay attention.” I quickly wrote it down and made a mental note to find a photo that would match it. There is so much truth in the statement. I don’t know anyone who chooses to have problems with horse. Most problems are caused because the human didn’t know;

Sometimes ‘not knowing’ also is a lack of seeing the ’cause and effect’ which is part of the learning process. Someone paying attention would begin to notice when:

Many things like rearing can be prevented or stopped if you can see the beginning…the head tossing, the refusal to go forward. Inexperience often causes people to miss these smaller signs. People who succeed with horses often:

Everyone makes mistakes…but not everyone learns from them. Be one who learns.