Episode 81: Leading one horse while riding another, how to teach ponying 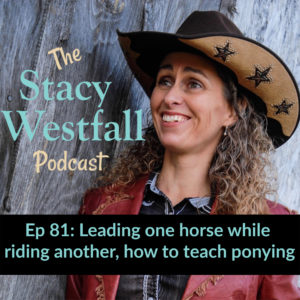 Today’s question is about teaching horses to pony or the art of leading one horse while riding another. Ponying can be a great way to exercise two horses at once as well as a way to expose a younger or less experienced horse to more of the world without riding.
This podcast lists things to consider regarding the horse you will be riding as well as the horse you will be leading or ponying.
It also discusses controlling your environment and situations you should prepare for such as narrow trails, barking dogs, etc

SWS081.mp3
[00:00:03] Podcasting from a little cabin on a hill. This is the Stacy Westfall podcast. Stacy’s goal is simple to teach you to understand why horses do what they do, as well as the action steps for creating clear, confident communication with your horses.

Ponying: the art of leading one horse while riding another.