Is it normal for a horse to “go backward” in her training? Soreness & missing signs?

“Is it normal for a horse to “go backward” in her training? My daughter’s horse…was doing amazingly well…and in the course of about 2-3 weeks is almost back at square one under saddle. She won’t put her head down; she won’t canter; she pulls “really hard” (per my daughter) at the trot. My daughter is in tears of frustration because nothing that we know of has changed. She doesn’t seem sore; same saddle; same bit; same everything! Granted, the horse is only 3 1/2 years old..but we are just confused!-Michelle”

The two strongest reasons for what you have describe are:

#2 -missing signs that this was coming

It is hard to say which of these two are more difficult to diagnose.

When I was in college I was training a mare who was progressing as expected for about two months. One day I took her out and she seemed cranky but everyone has bad days, right? The next day she was about the same, cranky, out of the norm for her. I had only know her for two months and it was spring and someone said maybe she was coming into heat, maybe that was the problem.

The third day when I put the saddle on she almost flipped over in the isle way! 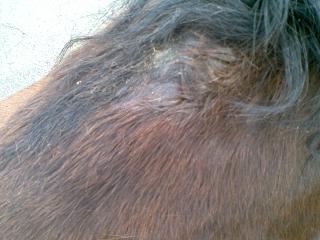 The next day while brushing her I noticed something sticky on her withers. I tried to pick it off with my fingernails and the mare threatened to bite me. I took her back to the vet and his face lit up with understanding. He said she had ‘fistulous withers,’ an infection that was not visible to anyone the day before.

Training issues don’t generally ‘pop up’ over night. I’m not saying it is impossible but it is much more common that small signs are there along the way. This is one of the biggest reason for riding with a pro on some kind of regular basis even if it is only once or twice a month. A pro can see things coming and can also evaluate if your progress is heading in a good direction.

I wish it were more clear. There are horses out there who cause trouble because they lack consistent training. The sad truth is that there are horses who have soundness issues that people try to fix with training.

The best recommendation I have is to get a hands on professional opinion. This can be a trainer, a vet or an experienced friend…or all of the above. Also remember to check in with your gut as it often can help you with your decision.