I wanted a saddle for Christmas…but got something else. 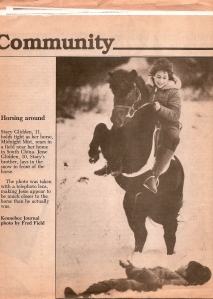 That year all I wanted for Christmas was an English saddle but I doubted I would get one. We didn’t have much money and I knew that even owning one pony and one horse (my mom’s) was a tight stretch at times. We had ‘bought’ my pony for a penny when I was six and she came with a western saddle and bridle. In exchange we  promised to take care of her, otherwise we had to give her back. My mom got her horse a few years later when his leg was torn up in a fence and his current owner was less interested in caring for it than my mom was. We had horses but just barely. Still, I was eleven and had enough faith to hold onto a glimmer of hope.

Our tradition was to open stockings at our house and then spend the rest of the day at my grandparents will ALL the family, opening presents one at a time. Around fifteen of us would gather and they made us thank each person by getting up and hugging them after each present, even if it was a shirt. We also stopped at lunch time for a huge meal, so even though it was Christmas day it would still be hours before I knew. But my brother, who was ten, and I had become experts at analyzing presents.

When we arrived at my grandparents and we both checked out the tree. We weren’t allowed to move things around but we could circle the living room and view the presents from many angles. I felt the anticipation seep out of me. There was no present for me big enough to be a saddle. My brother felt the same way. He had wanted a ferret but there was no present big enough to be a cage. At least we both felt the same way. There was something consoling about knowing we had both hoped. It felt less like we had been crazy for even thinking it might happen. And things weren’t that bad. We would still get something special, mom always tried…even if we would get lots of clothes too.

I got a new Breyer horse. My brother got a new Lego set. I opened another box I had pegged as cloths but was surprised by hand sewn horse blankets for my Breyer horses, back then you couldn’t buy them. Judging by how excited the adults were this was my big gift for the year. My brother opened another, we accepted our fate and ate another cinnamon roll.

By now it was dark, we were full and ready to go home but the adults were still talking and finishing the last few presents. We were hovering around the food sneaking another piece of stuffed celery when I heard my mom call my name. I ran around the corner and she pointed under the tree to a present labeled for someone else. So she wanted us to watch the last present be opened. Ok.

“But…” I started to say. She smiled. I looked again. It was big. Big enough to be a saddle.

“I must have mixed up the labels, open it.” She smiled again. She hadn’t made a mistake. Everyone was watching and although I was shy, I was also excited. Could it be? I tore the wrapping and could smell the leather. Mom helped me pull it out of the box. She was so excited for me. I could hear my aunts, uncle and grandparents talking excitedly. I couldn’t believe it. I had my saddle. A real english saddle.

I glanced up and that’s when I also saw my brother. My heart went from flying to falling like a rock. There were no more presents under the tree. He didn’t say a word…but he didn’t have to.

I turned back to the saddle and my mom felt the change in my mood. She opened her mouth but then quickly scanned the room…and saw my brother. I think he might have cried but I didn’t look close. I didn’t want to know. I was so confused.

Lots of stuff happened that I didn’t understand. I thought my mom went for my brother but then she appeared crying, I think, and carrying something. It was also big but she was also trying to explain, to apologize. “I couldn’t leave it under the tree.” she smiled softly at my brother, “Open it, you’ll see why.” He tore the loose paper off easily as it was only draped over the cage. Inside was a ferret that promptly scratched at the bars. I giggled. My brother smiled shyly and my mom had tears in her eyes. “I didn’t think about how it would look to you when Stacy opened the last present.” she spoke softly. “I guess I knew I had more but I didn’t see how it would look to you.”

May your Christmas presents be ones that you will continue to open for years to come.