Horses: how to create a seasoned traveler 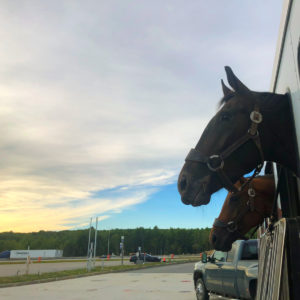 One week ago, Presto was beginning the longest haul he has done yet. Here are my answers to some of the questions you asked.

❓🐴How often do you stop to let the horses rest? Offer water, etc? Do you unload, if so when and how often?-Shirley

How often I stop depends somewhat on the horse I’m hauling, how long I’m hauling on a given day, and the road conditions.

I broke this trip into two segments. The first day I drove pretty much straight through with the exception of one stop for fuel. On this shorter trip I didn’t offer water as I have observed that mine tend not to drink until about the 4-5 hour mark (depending on the weather) and I was arriving at the 4 hour mark.

The second day I stopped about five times. I say about because I did two short stops trying to find diesel fuel at the service plazas without success…so those were very short stops.

I began offering water at the five hour mark. The weather was cool (about 72 degrees) and the air was moist. The horses played a little but didn’t want to drink. Considering that it was cool and that all three were acting the same I felt comfortable.

I read somewhere once that the energy of a horse standing in the trailer balancing themselves while hauling was the equivalent of walking. This seems to be pretty accurate to what I have observed. My horses are young, very fit, and they have been seasoned with shorter trips.

I do keep hay in front of them in hay bags. My horses have experience in hauling so I haul them without their heads tied which allows them to pick up dropped hay off the floor.

I don’t unload while traveling. I stop mostly at truck stops and I don’t believe that the risk of unloading in the parking lot is worth taking. I have heard that there are places further out west that are set up for unloading and if I were near one of those I could see considering it.

❓🐴Do you figure out ahead of time where you’ll overnight, or do you just have a ‘list’ and see how the day goes?-Laurie

I planned this trip around a known stop at a friends place. On other trips I have used [https://www.horsemotel.com] and found that between the descriptions and the comments, it is very accurate.

I broke the entire trip into two segments. I left Ohio and drove 245 miles which Google Maps said should take me about 4 hours. I was traveling to a preplanned stop at a friends house where the horses would be kept. I did this early in the day so I could teach lessons when I arrived. This also allowed the horses to watch the activity in this new place.

The second day I traveled 650 miles which Google Maps said should take about 10 hours. I chose to drive in these two segments largely because of the known stop.

I chose not to break the second day again because based on the horses fitness, the weather and the available stops I made the choice to go straight through.

The first day driving estimate was pretty accurate on the time. The second day turned out to be longer than Google estimated because of the extra stops. This extra time in the trailer when standing doesn’t bother me because my horses stand quietly and rest. If the horse being hauled gets more stressed during stops they often lack the short trip experience and training that my horses have.
It is important to consider factors like this because how the horse is acting change sthe equation when making these decisions.

❓🐴When you arrive at your destination, how much time do you give them before you ride?-Molly

I arrived just as it was getting dark out. The horses settled into the new location and were eating and drinking like normal very quickly. They were a little excited about the new place but not nervous.
The next morning I lunged them each lightly and observed them. They were perky, fresh and alert. I chose to lightly ride them.
After riding them I turned them out in a pasture…where they proceeded to run like crazy things!

Even with my experience hauling horses I still watch and consider each horse as an individual. I think it helped Presto that he was hauled with two horses that he knows well. I think the fact that those two horses have also been hauled long distances before helped them…which in turn helped Presto.

I’m also open to watching the horses as I travel. If I needed to modify my plans I would. One change I will make on the way home is that I will be hauling my own water. This is less about the flavor and more about the fact that half of the truck stops no longer have water available. Having water onboard will be one less thing I have to look for at stops.

❓🐴⁉️If you have more questions, please ask them in the comments. I’m still on the road and still answering your questions!

———————
I’ve owned Presto now for four years. He has grown so much and I’m finally ready to start sharing his adventures. You can find all of his posts on my website (stacywestfall_com_)
What questions do you have for me about Presto?
#PressonRegardless #Presto #Equithrive