The youngest of the rescues, nurse mare foals, draw the most emotional reaction from people, myself included.

I had to admit to Victoria that I had been stalking her for almost ten years.

Of course, I used the word ‘stalking’ in the most flattering way possible. Really a better word would have been ‘following’…but anyway…

My first experience with Victoria’s organization, Last Chance Corral, was at Equine Affaire in Columbus, Ohio. The reason I remember it so clearly was because my first reaction was near outrage at seeing someone with such a young foal at such a big event…without his mother. 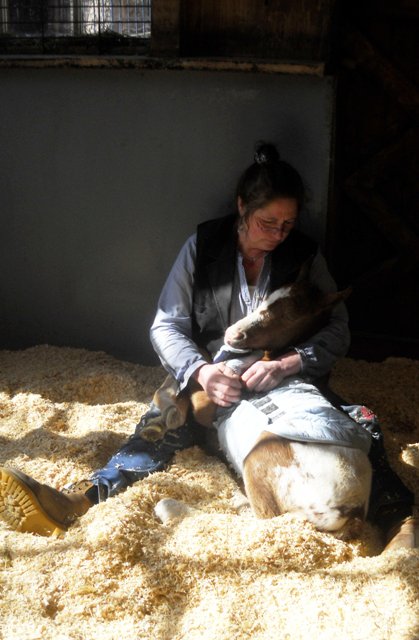 There was no way I was leaving without the full story so I directly approached the foal and handler. I calmly asked what the foal, obviously very young, was doing here and where his mother was. That was my introduction to The Last Chance Corral, founded by Victoria Goss.

That’s when I began stalking following the website and whenever I could, watching them at Equine Affaire. I had a strong desire to learn more about the strength of this rescue group as well as their effectiveness, outreach, and overall approach to horses and humans.

During my research phase I learned that the organization has a passion for rescuing horses of all ages. They rescue on average 75-100 full-grown horses during the year as well as 160 plus foals. The youngest of the rescues draw the most emotional reaction from people, myself included.

The Last Chance Corral website, videos and Facebook page do a great job explaining in detail what they do and why. I will insert my small experience here.

My first knowledge of a nurse mare came from a customer that I trained horses for. They had been involved in the equine industry for longer than I had been alive at the time and during a conversation they mentioned that once, one of their mares had died leaving them an orphaned foal.

“A friend told us to rent a nurse mare and gave me a contact in Kentucky.”

She then related to me how the nurse mare had been delivered to their home in Ohio and explained that the person delving the mare had helped introduce the mare and foal. When the foal was weaned the mare was returned.

Then the subject of the mare’s original foal came up. It was explained that the nurse mare farm was set up to handle ‘orphaned’ foals. They had the knowledge, the staff and the facility that the average horse owner lacks. Part of the fee charged to lease the mare went to insure that the foal was cared for.

I would like to think that emergency situations were the only times that nurse mares were used but that isn’t true. It also isn’t true that a mare MUST have a foal to become a nurse mare.

Yes, it is possible to have a nurse mare, a mare that is lactating, without the mare producing a foal. Lactation can be induced by chemicals also. I spoke with farm employees who kept entire herds of mares hormonally/chemically monitored by a vet to ensure the availability of nurse mares without the ‘by-product’ of a foal.

But it comes at a financial cost. It isn’t as cheap to have a vet monitor and regulate hormones on a group of mares when you could breed them and forget about them until you needed them.

I will ask this one thing of you if you have read this far; remember that inside of any large group or industry the odds are that there will be some scum. Please remember that the presence of some scum doesn’t condemn the entire industry.

The bottom line is that:

1) there is a demand for nurse mares

2) there are good farms who do right

3) there are bad farms who do wrong

Victoria is here to catch the slack for group three.

Victoria was a no-nonsense, direct speaking woman and I know this from personal experience. I called Victoria in October 2013 to ask some questions and to see if I could stop by….but I left out my name:)

Victoria answered my questions and didn’t waste any words.

Then I went to visit her. 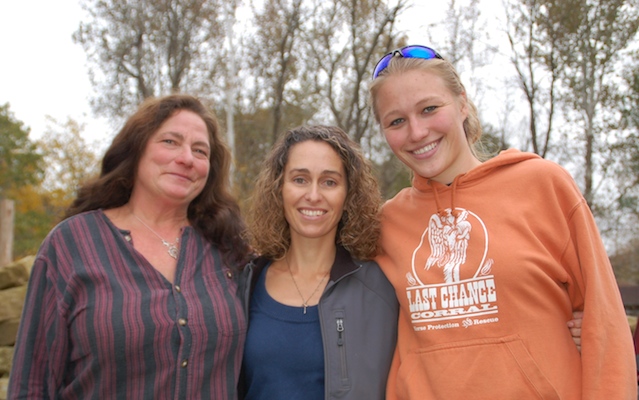 It was really funny! I still hadn’t told her my name and when we pulled into the lower driveway we were informed by some ladies that Victoria was in the house. We thanked them and pulled out of the lower driveway into the upper drive that led to the house. I later learned that one lady turned to the other and said, “That chick is a DEAD RINGER for Stacy Westfall….”

Up at the house it was time to confess to Victoria and all who I was and why I was there; I wanted to help.

How can I help? Victoria answered almost without thinking.

Curious, I asked why spreading the word was the first thing she thought of and her answer made sense; the rest will follow.

She isn’t shy about the biggest need as far as the foals go either; homes. The faster they find homes, the more Victoria and the team can rescue. She tried to get me to adopt during that first phone call when she didn’t even know my name….lol.

I was, and am, impressed with the dedication that Victoria has shown to horses and I am not alone. In 2001 the American Veterinary Medical Association selected Victoria Goss to receive the AVMA Humane Award in recognition of humane efforts on behalf of animals and exceptional compassion for animal welfare.

There are several things I have in mind that I would like to do for the Last Chance Corral but I know what the first will be. Spread the word.

Will you help me?

The Last Chance Corral Facebook page currently has 25,455 likes. It deserves a million.

By clicking ‘like’ on their Facebook page you could help save a foal,  a friend of a friend could be the the next person to adopt.

Lets aim for 50,000 by this time next Sunday. What do you say? Like them and spread the word. Some of these little guys have grown up and become amazing adults…but more on that in another post.

P.S.- If you are interested in adopting please read the adoption policies page of the Last Chance Corral website.