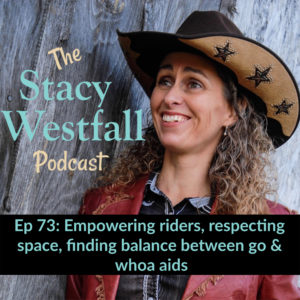 Listen as a caller describes how she changed her lunging experience in a matter of days. Stacy outlines the steps that made this ‘leap’ in learning possible. Hazel calls in and asks how to get her school horse to respect her space more. Stacy gives her three different suggestions. Amy has questions about how to get her ranch horse to ‘wait’ a bit more during the trail obstacle phase. Stacy explains how she teaches this type of ‘wait’ using three different examples: lunging, riding a nervous horse and when teaching the sliding stop. Stacy’s goal is to empower the rider through education.

SWS073.mp3
[00:00:03] Podcasting from a little cabin on a hill. This is the Stacy Westfall podcast. Stacy’s goal is simple to teach you to understand why horses do what they do, as well as the action steps for creating clear, confident communication with your horses.