Episode 154: Creating emotions to benefit you and your horse 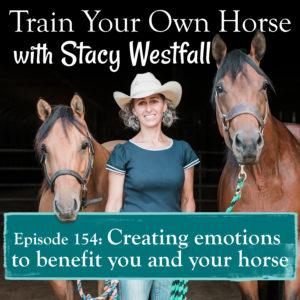 Horses are excellent at reading emotions. Have you learned the skill of creating an emotion on demand? You’ll learn how to create and emotional state: both positive and negitive. I’ll share an example that you can do in five minutes to experience your control over your emotions. Then I’ll share three situations where you can practice creating a positive emotion.

Stacy Westfall: Hi, I’m Stacy Westfall, and I’m here to teach you how to understand, enjoy, and successfully train your own horses. In this season of the podcast, I’m discussing life coaching principles and how they apply to working with your horse. Life coaching addresses what I call the rider’s mind, which ultimately shows up in all of the quadrants. This week, I want to discuss the idea that we can create our emotions. I was first introduced to this idea when I was in college and we had a guest speaker that came to visit. Her name was Barbara Schulte, and here are some interesting facts. When I met Barbara, I was in college. She was a guest instructor. And years later, when she saw my bareback bridleless ride, she had no idea that she had talked to me. My name had changed and she didn’t memorize everybody’s names, and so she did not realize that she had actually helped me create that bareback brideless ride with the knowledge that her one lecture provided. Because this idea that I’m going to explain to you today, knowing how to create and control my emotions was revolutionary to me when she taught it to me. And then it definitely helped me, especially with my dad having recently passed away right before I did that ride. Then it’s really interesting. Our paths, mine and Barbara’s crossed again in 2012, when we were both inducted into the Cowgirl Hall of Fame together that same year. I think it’s really interesting how we just kind of keep weaving our lives together. And at the end of the podcast, I’m going to tell you one other way that they have yet again intersected. What I want to do right now, though, is review two of the things that really stood out to me when I was a college student and Barbara spoke to us. So basically, the two that have stuck with me all of these years were number one, she taught us in a very quick setting how we could control our emotions. And then she taught us how we could trigger, or help recall, those emotions. And those are the two things that I carried forward with me all the way into that ride with Roxy.

Stacy Westfall: Now here’s an interesting thought. When you’re practicing an emotion like possibility, when you start practicing something like possibility, what you might notice if you tried possibility on for five minutes a day for the next week it would be really interesting because some people call this dreaming. And so if you try on this feeling of possibility, I want you to like actually think, like, what would it be like to try this on like it’s a coat or some other piece of clothing. Like I’m going to put on possibility and I’m going to wear it in my body and I’m going to pretend I’m going to feel it. I’m going to remember what it felt like when I felt as a child or whatever situation really brings it up for you. And if you practice that every day, you’ll do some interesting things because you’ll get way more aware of it, and it’s a lot like when Barbara challenged us all to cry for $10,000. What’s interesting is that you’ll start to notice that, to feel possibility, to really, truly feel it. Your mind will start finding these things, to dream about these things, to dare to hope about, and you’ll start to feel that daring side of possibility. Like, I could be brave and I could dream that big. And your brain will actually start to shift to look for these positive ways that this could be possible. And it’ll a lot of times also look for ways that you’ve experienced possible before, and it worked out. I think it’s so fascinating to do this exploration because listen to what Walt Disney said. I love this quote. Walt Disney said, “every child is born blessed with a vivid imagination. But just as a muscle grows flabby with disuse. So the bright imagination of a child pales in later years if he ceases to exercise it.” And basically, what we’re doing when we’re doing these exercises of practicing something like possibility is we’re exercising of the imagination and trying on emotions can feel really awkward if you are very out of practice. All the more reason to try it on. I will give you one warning if your brain works anything like mine when my brain starts trying on something like possibility. A lot of times right in the middle of trying on something like possibility and dreaming bigger and thinking how this could work, my brain, this part of my brain will offer me a different thought that says something like, you shouldn’t get your hopes up so high. And when you hear those little extra thoughts of like, don’t get your hopes up too high, something bad could happen. It probably won’t happen, blah blah blah. Just watch for those sneaky thoughts. My favorite one to do at that moment is to just be like, Nope, I’m trying on possibility for five minutes, so you’re not welcome here. I’ll deal with you later. But one thing to keep in mind is this even if you’re in the middle of your five minutes of trying on possibility and at two and a half minutes in, the thought comes in. Don’t really dare to think that. Don’t really dare to believe that. Who do you think you are? You’re not–never going to be able to do that. Like whatever the thought is, whatever the feeling is, whatever is there, the minute that shows up and you recognize it, you’re already doing it right. Isn’t that crazy? That in the middle of failing to be able to put on possibility for five minutes straight without an interruption, then noticing of the interruption, the awareness of the fact that your brain is offering you a different thought and that you have a choice in whether or not you’re going to accept that interruption is exactly what I was talking about in Episode 152. If you can become aware of your state of mind during an event, even if it’s the awareness of what’s not working, you are on your way to greater awareness and this will lead to better communication with your horse. The last thing I wanted to tell you about Barbara Schulte is that our paths crossed again recently because she just started her podcast and interviewed me for that. So if you would like to listen to Barbara and the people that she interviews and the work that she does, you can search for her in your podcast player or I’ll put links in the show notes. Her name if you’re searching your podcast player is Barbara Schulte. And again, I will put links to that in the show notes. Thanks for listening, and I’ll talk to you again in the next episode.