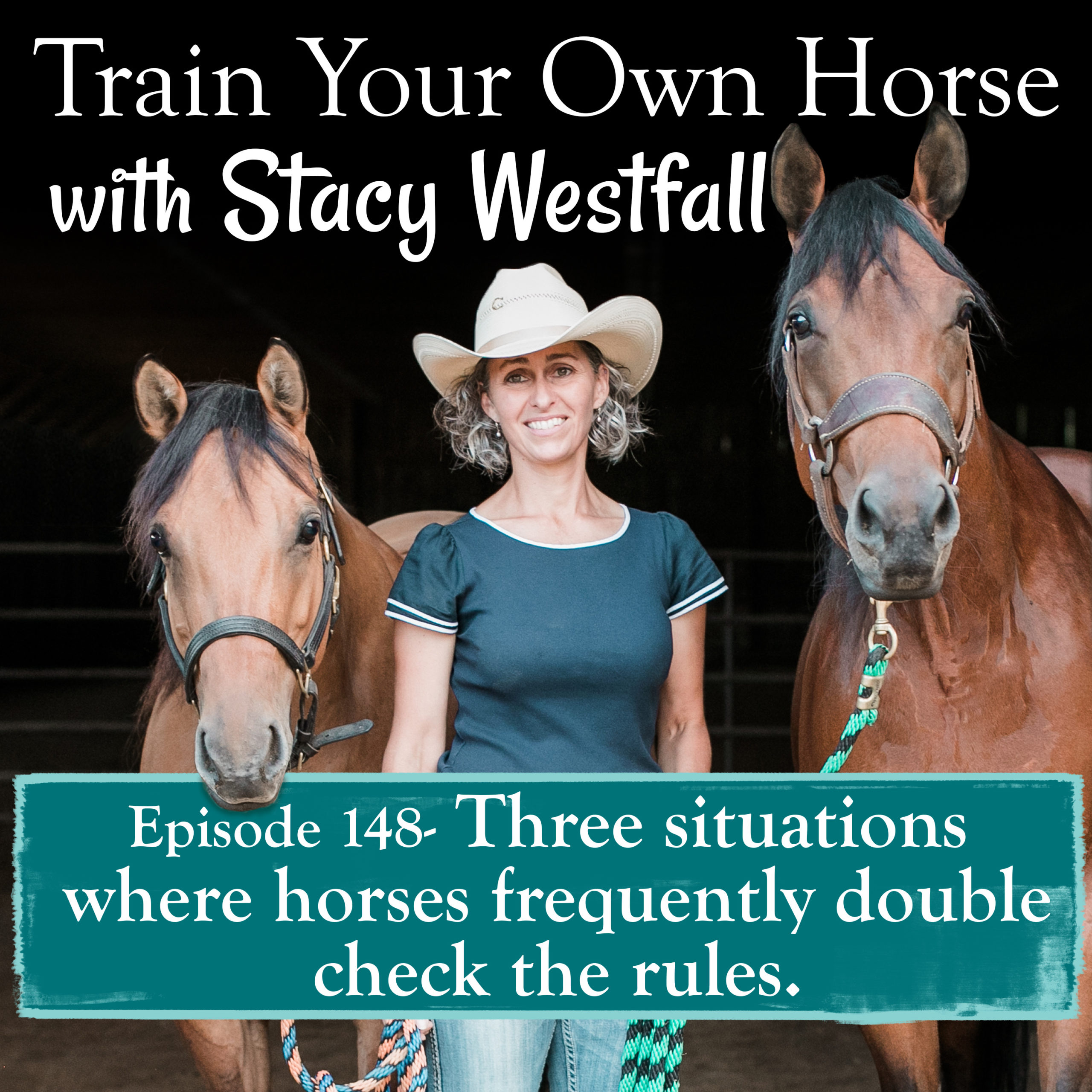 In this episode, I discuss three situations where it is common for horses to ask questions about the rules. I call these moments ‘Grandma’s rules’ which is my fun way of explaining that horses are always seeking out the most benifitial set of rules to opperate by. I explain where the name came from and how understanding this can improve your view the questions your horse is asking you.

Stacy Westfall: Hi, I’m Stacy Westfall, and I’m here to teach you how to understand, enjoy, and successfully train your own horses. In this season of the podcast, I’m teaching about some of the common challenges that I see when teaching riders. Today, I’m reviewing what I call grandma’s rules. I’m going to explain what it is, why I phrase it this way, and why I think it matters. Then I’m going to share three different examples of places where you’ll see grandma’s rules at work. The first thing I want to start with is what in the world is grandma’s rules? So basically, if you’ve been a long-time podcast listener, you’ve probably heard me use this phrase and maybe you’ve had the little short version of the explanation, but basically, to recap it here, the phrase grandma’s rules is my fun way of explaining that horses are always seeking out the rules and that they know that the rules change from time to time. In the example of the phrasing grandma’s rules, it indicates that it changes with different people. So it also changes with individual riders. For example, if you’re tired on a certain day, you can actually get to the point where your horse realizes when you’re in that frame of mind, you have a different set of rules. So basically grandma’s rules is explaining that horses are detecting where the rules are. And I think it’s worth mentioning why I named it grandma’s rules. Basically, it came about because I have three sons, and when they were little kids and they were all in like single-digit ages, we took them to grandma’s house so that Jesse and I could go out to dinner. Grandma was going to watch the boys, and she asked if it would be OK if she could pay the boys to pick apples off the back apple tree in the backyard so that she could make applesauce with the apples. And we said yes, and as we stood there and visited, she explained to the boys she was going to pay them and they ran out to the tree and they filled this grocery bag. Like, picture a plastic bag that you would get from Walmart or somewhere. And they came back in with this bag just full of apples. She paid them and they ran back out. We left and went to dinner, and when we came back, we walked in. We were visiting and I noticed in the corner that there was a big, fluffy pile of what appeared to be empty plastic bags. And I walked over and I picked one up and there was a single apple in the bag. And I asked what happened? And Grandma started laughing, and she said that the boys started bringing them back and she kept on paying them. And it was kind of funny because you could look at the pile of bags and you could see that it didn’t take these little kids very long to figure out that grandma paid the same for a full bag of apples as she did for a single apple in a bag. So what the kids did was they moved to that easier thing as fast as they figured it out. I mean, you could just see that it didn’t take long for them to figure out and the majority of the bags had a single apple in them.

Stacy Westfall: The reason I think it’s so important to explain it in a way when we see the horses behaving and asking certain questions and–and doing different things, I think it’s really important how you view it because the way that you view your horse asking questions is going to change how you respond. So when I tell you the story about the apples and the boys and grandma, what came up for you there. Like, did you get mad at grandma for changing the rules? Did you laugh at the kids for figuring it out? Like, it’s kind of interesting because I think there’s a lot in that story, especially when you can see it from that human angle that you can then turn around and you can apply to the horses because there are different ways that the horses are going to ask different questions about rules or boundaries. Three that I see really common are when you change people the horses ask questions, when you change location the horses ask questions, and when you yourself change, the horses will ask questions. And if we can look at the horses and see that they aren’t trying to cause problems as much as they’re just trying to figure out about these moving boundaries, then maybe we can empathize a little bit with what they’re going through and we can say, Hey, you know, I’ve been in situations like that where I, you know, had some questions about what was going on there, too. So let’s unpack each one of these situations just a little bit. I see fairly frequently that when horses have the handler change or the rider change, that the horse will change. And this is an example of what I’m calling grandma’s rules. So imagine that I show up at your house and I’m like, Surprise, here I am. What would you like me to show you? And you start explaining an issue that you have with groundwork. And so I asked you to demonstrate it and you’re showing me and you and the horse are demonstrating that there’s a struggle with going across the tarp. Now, very frequently, if I’m in a situation similar to this, somebody will say, will you show me? Or sometimes I will say, would it be OK if I show you a couple things? And then I take hold of the lead rope and this is always really interesting, because when we switch handlers, a lot of times you’ll see the horses kind of perk up and they’ll kind of perk up and they’ll be like, Hmm, interesting. And I like to think of it like, they’re going, huh, substitute teacher. Do you remember being in school? Do you remember when substitute teachers would come in? And do you remember that there were lots of different kids in the class and they all had different reactions to that substitute teacher? And so a lot of times all the horses doing is–is recognizing that this is a different person and they may have different rules. And the more the horse has practiced learning that there are different rules–now what’s interesting is you’ll see this in the herd. You’ll see certain horses ask a lot of questions about this and you’ll see others they kind of just accept their position without as many questions. And I would argue there’s a direct correlation between how many questions they’re asking in the herd and how many questions they ask of us humans. But back on topic, basically a lot of times when we change people, you can see the horse change in their response, at least to the level where they’re like trying to detect the new rules. And that is always an interesting thing because all you’re doing is seeing that the horse changes rules by changing people. Now a lot of times what we’ll see if–if somebody is here at a clinic and we do this a lot of times, what we see is that the horses get a little bit more reserved when the new person comes in because they’re a little bit like, I’m not quite sure. Now sometimes you’ll have super exuberant horses that are like, woo-hoo, and they and they ask different, bigger kind of questions. But it’s more common for the horse to look a little bit suspicious of the new teacher. Just a little bit like they’re reading me a little bit different, because what that’s also telling you is that they’ve also kind of got a comfort level with the human that they came with a lot of times. And so a lot of times they’re like, Oh, there’s a difference here. I’m not quite sure what the difference is. And then sometimes inside of that, when you change that rule, you’ll see a little bit of the horse’s natural temperament peeking out there. So maybe it is like this very creative horse. And so they’ve got certain questions they ask. Maybe it’s a really reserved horse. Maybe the horse has, you know, different opinions due to the–the past history of being handled and different things like that. But you’ll see some different things, but it’s very common to see a little bit of a change, and that would be one example of grandma’s rules.