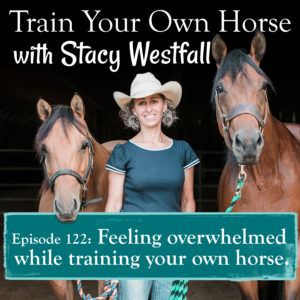 A listener asks a question about feeling overwhelmed. She is studying and learning about good horsemanship, developing true partnership and relationship. She is aware there are a LOT of things happening.
First I give an overview, then I give FIVE actionable steps for addressing this and then I close with a real life example that includes a miniature horse!

Stacy Westfall: Hi, I’m Stacy Westfall, and I’m here to teach you how to understand, enjoy, and successfully train your own horses. In today’s podcast, I’m answering a question from a listener who’s feeling overwhelmed while training her own horse. And I’m going to answer this a little bit based on the phrasing that she used of intangible and tangible. So the podcast will begin with a little bit of theoretical, intangible kind of stuff. But don’t worry, hold on. Later in the podcast, I’m going to give you five very tangible, actionable steps that you can do, and then I’m going to wrap up with a story about a mini to bring it all home. Let’s go ahead and listen to the question.

Caller: Hi, Stacy. I am a huge fan of your podcast, like anybody asking these questions, I’m sure. Thank you so much for all of the knowledge and expertise and wisdom that you put out into the world to help all of us horse owners. Thank you so much. My question is a little bit intangible. I hope that’s OK. Well, I know, you know, as I’m saying, that sometimes your answers are kind of intangible, too. So maybe it will work. I don’t know. But I am getting a little bit overwhelmed with the more that I learn about communication with horses and true partnership with horses and, you know, the nuances of good riding and good groundwork. It seems to me that ultimately it comes down to an ability to really be present with what’s happening in your body, like what are you physically doing? What’s going on in your head? You know, the four square model, but it’s being really aware of all four squares at the same time, and I can do one of them maybe, but I’m struggling with the idea that I need to do four of–all of–like I need to be aware of all four in order to get that good relationship with my horse. I have a 13-year-old gelding that I got last year, and he’s awesome. He’s such a sweet guy, but he’s a little shut down and doesn’t really love to pay attention to me. And so I’ve been really trying to work on the relationships so that I can get his buy-in. And I’m really struggling to pay attention to all four of those things at once, and I wonder if you have any advice.

Stacy Westfall: First, I want to thank you for your question and for permission to be slightly intangible. And I do love this because to me, I think that there is a dance that goes on here. When I listen to your question, I was thinking how it’s interesting that when things are really tangible, when it’s like, OK, how do I get my horse to load in the trailer? Sometimes it helps to think in less tangible terms at that moment. But then there are other times that when something is really intangible like relationship, sometimes it helps to think of them in a very tangible kind of a way. So I love that you mention this, because even though I haven’t been super direct about saying that’s part of what I do, I definitely know this is what I do on the podcast on purpose. I’m really aware of it because even though I don’t necessarily define it for you guys or even necessarily when I’m making my outline, I know that I’m doing it. And I know the reason is because I’m really aware of this dance between the rider’s mind and the rider’s body. Just like with the horses, it’s like this dance of the mind and the body. Ultimately, we’re after the mind because in the very, very final end of it, when we look, we’re like, wow, if we really have the mind really in the right place, then we can do anything we want with our body, their body. It’s–it’s not restricted by our mind. So the more open that is, we can then max the potential out on the body side where a lot of times you’ll see that the body is kind of restricted because of the thinking. And so, as you mentioned in your question, you know, there is for sure this idea of being very present and very self-aware. And so for me, when I’m listening to questions like yours, actually any of the questions that come in, what I always do is I put myself in your place. So I put myself first in the place of the person who is asking the question. Then interestingly, I put myself in the place of the horse that’s involved in the question. But I think it’s interesting for me when I put myself into your place, into the place of the person asking this question, because most of the time I’ve been in these mental places before, the place where this question is on my lips or was spoken by me or someplace really, really similar. So that’s what I’m doing and that’s what I’m going to do as I answer this question for you, because when I hear you asking this question on the surface, I can find myself in that spot several different times in my life. But then what’s interesting, when I ask that same question, when I put myself in that place and I take it to the essence of what you’re asking. I feel it a lot more times in my life, I can feel it very recent. So it’s interesting sometimes when it’s–when it’s boiled down to real black and white, like maybe you listen to me answering a question for somebody who’s having trouble getting their horse in the trailer. It can be really easy to dismiss a question if you feel like, well, I already know how I can get a horse in a trailer and I don’t have that problem and you can kind of go on. But what’s interesting is to think if you listen to me answer a question like that, what is the essence of this question that’s being asked? Because that’s when you can start realizing that you have a lot in common with people, because it comes down to a lot of this mind stuff that you mentioned in your question that have led you to this spot of overwhelm. So, as you mentioned, I’m going to run this around in both the tangible and intangible kind of way.

Stacy Westfall: It’s interesting because if you’re really struggling with this dance between like, oh, this is another one of these assignments and I really want to get this, some version of right. I really want to get this right. I really want to get better. And now she’s, like, telling me to be a child and I don’t understand. If you’re really struggling right here–this is going to sound really counterintuitive–but if you record five minutes of your next session on your phone or some kind of device, just set it up on a tripod and just hit record and go out there and do that lunging session or ground tie your horse and brush them, whatever it is that you would kind of normally do. While you’re not going to probably act completely normal when you videotape, what you’re going to notice is that if you put the video on, even if you don’t act totally normal, videotape five minutes of it, shut it off. Then what I want you to do is when you go back to the house later that night or maybe you go out and you sit in the car afterwards and you’re armed with a pen and paper, when you re-watch the video a lot of times that’s when you’ll find those really blocked things. Like you’ll watch yourself and you’re like, oh, why did I do that? The last–I’ve taken 10 lessons in a row where they told me not to step like that. You’ll find your criticisms and your doubts and your fears while you watch that five-minute segment. And odds are those are the things that you’re resisting and fighting that are helping to lead to this overwhelm. Because you can also take that five-minute video and you can notice just one thing that’s really interesting, even if you don’t know what to make it mean. And you can watch that five minute video and you can find just one thing that you want to focus on. No, no, wait a minute. You don’t want to “focus on” it. One thing you want to “notice” again next time you work your horse. Because I think so many times when people are stuffing down those doubts or those fears, that’s when you’re damaging the relationship. And if you think that you don’t have doubts or fears when you’re working with your horse, that should probably be the biggest red flag that you’re stuffing them down, because, at least for my experience, whenever I’ve thought that I had none, it was actually the biggest red flag that I was in denial about them. And I know I’m not in denial about them when I can touch them and handle them and understand them and still be like, I understand you’ve got this doubt and this is how we’re going to approach it. Because here’s an interesting thought. If you stuff down the doubt and you laugh and you pretend everything is fine and underneath, somewhere deep underneath, you realize it’s not, the disconnect is actually happening in the relationship with you. Because you have a relationship with you. And when you’re in that denial phase, and I have been there before, and I try so hard to be aware when I’m in it, even now, the fastest way to me for me to find it is to start looking around at different relationships in my life. And sometimes that’s a horse relationship and sometimes it’s not. And when I feel an incongruent feeling, feelings that don’t line up with the way that I’m acting or talking or showing up. Like I say I’m fine, but I feel flat or disconnected. I say I’m fine or but I feel like I really wish I hadn’t said yes to that. When I feel that moment of incongruent for me now, that’s that red flag that I’m disconnecting something with me that I really need to figure out. Because then I show up as me. And that can be me laughing and that can be me crying and that can be me because I’m OK with all of me. And when you can do that with your horses, you get a lot easier to read and you get a lot more interesting.

Episode 112: Can you have relationship AND results with your horse?