Why I use this product:
There are many versions of this on the market under many different names…and with wildly varying prices. Here is why I designed this one the way that I did.
When I designed this stick and string with Weaver Leather I had two main goals in mind; improve the string and lighten the stick. 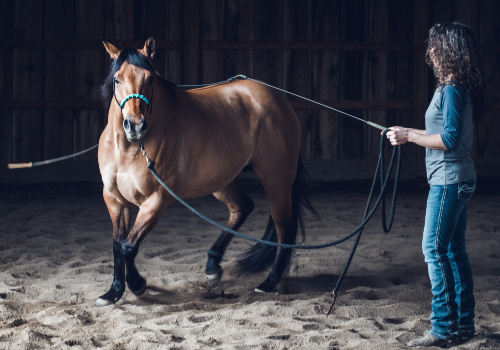 First, I wanted a string that was properly weighted. The two main differences between a stick and string vs a lunge whip are the weight of the string and the length and stiffness of the stick.

About the string:
The string serves an important purpose. I use this tool in three main ways; as a lunge whip, to desensitize to noise, to desensitize to touch. This string features a double core which allows for greater accuracy and durability.

I use three main motions with this string; up and under to ask the horse to move away from me, wrap from behind to ask the horse to increase speed, or down and over to require the horse to move forward. In addition to these moves, I also toss the string over the horse's neck, back, rump and wrap it around the horse's legs while in motion and standing still. This is why I require a very accurate string.
Many of the cheaper versions of this have very flimsy strings. While this saves the company money during manufacturing, it costs the user in several areas. A flimsy string makes for a less accurate tool.

About the stick:
I asked Weaver to taper the stick to make it lighter while still remaining strong. The stiffness of the stick is a key difference when compared to a lunge whip. The solid stick increases accuracy and also allows for the tool to be used as an extension of your arm. With untrained, young or rowdy horse I use the stick to create a ‘bubble’ of space around me that the horse is only allowed to enter if invited. Later on, my elbows will serve the same purpose but in a smaller space. It is important to me that the horses learn to respect my space or ‘bubble’ as they are much bigger and stronger than I am.
I also use the stick to ‘balance’ the horse. In early training, you will see me using the stick and string to both scratch the horse as well as to tap the cannon bones to move him out of my space.
The problem with tapping or scratching with a different tool, for example, a lunge whip or a dressage whip, is that they lack the stiffness and therefore translate a different feel. While light taps with a dressage whip may seem similar, a dressage whip quickly begins to ‘sting’ if used harder. On the other hand, a lunge whips handle is often both flexible and very long.
I prefer the stick because as I keep my tapping rhythm the same, I can increase or decrease the intensity without adding any ‘sting’.
The stick also has a high-quality club-style rubber handle and a leather loop on the end for the attachment of the string.

Weaver Leather is known for making high- quality products and several of my stick and strings have been with me for over a decade!

Use code 'Stacy' at check out for 15% off your entire order!

Disclosure: Some of the links here are affiliate links, meaning, at no additional cost to you, I will earn a commission if you click through and make a purchase.